Oops, He Did It Again; Busch Confirms JGR Move To Toyota In 2008 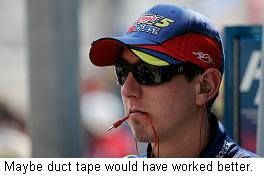 Look at it this way, Kyle Busch may have saved his new team a lot of money.
There’s no need to invite a bunch of reporters to the Joe Gibbs Racing shops next Wednesday, no need to roll out the complimentary food and drinks, and no need to print up a bunch of pesky press releases.

Shrubby took care of all that today, confirming to a group of stunned media members here at California Speedway what is not scheduled to be officially announced until next week; that JGR will switch manufacturers from Chevrolet to Toyota next season.

"I feel fine with it," said Busch, declining to dance around an issue that has made him and the entire JGR operation look like the Ritz Brothers over the last 30 days. While team officials were still quoting the official “we don’t anticipate making any announcements this weekend” company line – Busch let the biggest cat in NASCAR out of the bag.

"I think it's something that's going to take Joe Gibbs Racing hopefully a step forward in the right direction,” he said. “They've got a great repertoire for being able to produce winning race cars and championship-contending teams, year in and year out, so I think they're going to be just fine.

“This is a business decision that they've done right."

Busch said he is confident the horsepower issues that have plagued Toyota this season can be solved, with JGR’s head engine builder, Mark Cronquist, leading the effort.

"I've met with him a few times, (and) he's a really cool guy,” said Busch. “When we were talking about Toyota, they brought him in because I had a bunch of questions about the motor. They've got the ...top-end power, but don't have bottom-end. Mark (said) they feel like the package they've had (with) Chevrolet…can translate to Toyota, and hopefully have a pretty good piece come January."

Note to J.D. Gibbs: you can cancel the finger sandwiches.
Posted by Dave Moody at 7:16 PM