Notes From A Crazy Day At The Glen

Sunday's dust-up between Kevin Harvick and Juan Pablo Montoya at Watkins Glen could aptly be called a confrontation, maybe even a shoving match. But a fight?

I don't think so.

I've seen plenty of fights; even taken part in a couple, back in my younger days. And every fight I've ever seen included at least one bonafide attempt to inflict bodily harm on another individual. Neither of yesterday's combatants seemed remotely interested in harming anyone. Any fight worth its salt also requires at least one actual blow to be struck, something that did not occur in yesterday's Harvick/Montoya square dance. What I saw -- admittedly from a distance -- was two drivers expressing their displeasure with each other, while attempting to decipher what the other guy was yelling through his helmet.

That's not a fight, that's a conversation with hand signals. NASCAR's John Darby had it exactly right when he said of the tiff, "I thought it was cool as hell."

"I got run over," said Harvick afterward. "I guess (Truex) ran over the 42. I just hate it. I'm frustrated with the No. 42. It just seems like he runs over somebody every week. I was talking about kicking his ass, because that's how I felt about it."

As expected, Montoya had a different take, saying, "I went to the inside to defend the No. 1 car, and he spun me from behind. When he spun me, I got backward into the 29. (Harvick) got out of the car, came out disrespectful, saying all kinds of things, grabbed me - and I don't appreciate that.

Making It Official: A press conference is scheduled for tomorrow morning to confirm what Sirius Speedway first told you more than a week ago, that Kyle Busch will be the new driver of Joe Gibbs Racing’s #18 car next season. Team president J.D. Gibbs confirmed the announcement yesterday, saying, “Before I say anything I want to have a done deal. Right now, we feel good about it and the direction we're going." Gibbs said Interstate Batteries will remain as at least an associate sponsor next season, but said additional backing could be added.

DEI Driver Search: The DEI driver search is now in full swing, as the team seeks a new driver to replace the departing Dale Earnhardt, Jr. 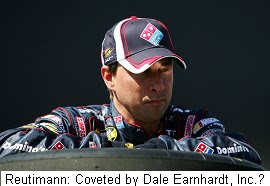 DEI had hoped to land Busch, but their attention has now shifted to a short list of drivers said to include Greg Biffle, Regan Smith, J.J. Yeley and David Reutimann. Biffle remains under contract with Roush Fenway Racing through next season, so any deal with him would have to include a buyout of his present deal. Reutimann is unable to talk officially to any other team until his one-year contract with Michael Waltrip Racing expires at the end of the year. Mark Martin is reportedly lobbying his new bosses hard for Smith, while Yeley said this weekend that he is talking to a number of teams about next season, including DEI. Martin could also be moved to the #8 Chevrolet along with part-timer Aric Almirola, with the new driver taking over the US Army #01.

Richard Childress said he also believes JGR’s departure is imminent. In his words, "It's pretty well written in stone." As a result, Childress said he no longer feels comfortable sharing information with Gibbs at Thursday's monthly partner’s meeting in Detroit. “We’re not going to discuss with them…things that we normally would discuss openly,” he said. “(We’re) working on stuff for next year, and we don't want them to take that and help out the competition."

DEI Director of Motorsports Richie Gilmore said, “If they're as far down the road as we're hearing, they should come up with an excuse (not to attend.) They're a very classy group. If they're that far down the road, I wouldn't expect them to show up."

Gilmore said the timing of Gibbs’ move is especially bad, adding, “We just developed a new engine, and all that technology is gone to another competitor.” 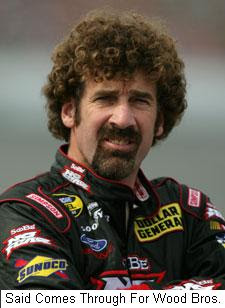 Wood Brothers To Top 35: It was “mission accomplished” for Boris Said and Wood Brothers/JTG Racing, after Said replaced Bill Elliott yesterday and drove the Little Debbie Ford to a 14th-place finish in the Centurion Boats at the Glen. That finish pushed the team to past Dave Blaney’s Bill Davis Racing/Caterpillar Toyota team and into the Top 35 in owners points, giving them a guaranteed starting spot this weekend at Michigan. Blaney finished a lap down in 35th, and now trails the No. 21 by 37 points in the owner’s standings.
Posted by Dave Moody at 1:13 PM