These are dark days indeed for the inhabitants of Earnhardt Nation. 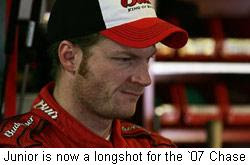 Their hero, Dale Earnhardt, Jr., is leaving the team his late father built to join the hated Hendrick Motorsports empire. It’s the auto racing equivalent of Ernie Banks signing a free-agent deal with the White Sox, and many members of Earnhardt’s “Red Army” still have not come to terms with it.

Last week, they were bitterly disappointed when negotiations broke down between Hendrick and DEI that would have allowed Junior to take his venerated #8 with him when he goes. Junior reacted angrily, accusing stepmother/DEI owner Teresa Earnhardt of personal pettiness and greed. Earnhardt Nation went even further off the deep end, reacting as if Teresa had been accused of illegal dogfighting, rather than simply exercising her rights as a team owner.

Yesterday in the Irish Hills of Michigan, Earnhardt, Jr.’s hopes of qualifying for NASCAR’s “Chase For The Nextel Cup” suffered a crushing blow when he overshot his pit stall on a late-race pitstop, turning what appeared to be a sure top-five run into a shocking, 12th-place finish. He now stands a whopping 163 points out of the Chase with only three races to go, and his chances of making the post-season dance are twofold: slim and none. 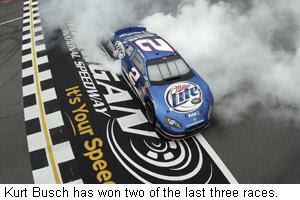 Earnhardt is struggling to finish races these days, while Busch -– the man he has to catch -- is winning them. Earnhardt must gain an average of 55 points per race on Busch in their next three starts, including Saturday night’s “Sharpie 500” at Bristol Motor Speedway. In 13 career Bristol starts, Busch has five wins. Earnhardt has only one victory in 15 attempts.

Simply put, it’s not looking good for the leader of the Red Army and his loyal foot soldiers. They’re running out of time, and also excuses. 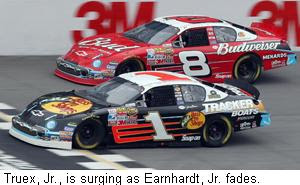 Until Earnhardt forgot his parking space Tuesday afternoon, his followers had a convenient explanation for their sudden fade from title contention. Two crippling engine failures in the last three weeks offered incontrovertible proof that Teresa Earnhardt and the DEI engine shop were conspiring to knock NASCAR’s favorite son from the championship picture, while simultaneously elevating teammate Martin Truex, Jr., to #1 contender status. Yesterday, however, Junior shot himself in the foot, leaving Earnhardt Nation to face the distinct possibility of missing the Chase for the second time in three seasons, with nobody else to blame.

Worse of all, Earnhardt’s late-season swoon has coincided with an equally dramatic surge in fortune for rival Busch. As the Budweiser Chevrolet and its perennial Most Popular Driver go down in flames, the Miller Lite Dodge and its considerably less-beloved wheelman are rising from the ashes like a phoenix. Three weeks from now, Busch will likely be chasing his second Nextel Cup, while Junior will be bubbling about his 2008 prospects at Hendrick Motorsports.

It’s enough to make any self-respecting Junior Fan do a half-gainer from a tenth story window.
Posted by Dave Moody at 1:26 PM