Some of the more jaded members of NASCAR Nation have spent the last 48 hours bemoaning what they saw as a non-competitive “Sharpie 500” at Bristol Motor Speedway Saturday night.

David Poole, the esteemed and generally grumpy co-host of Sirius NASCAR Radio's "The Morning Drive," spent four hours on his soapbox this morning, calling the race one of the worst he has ever seen at Bristol. He lamented the fact that there was just one pass for the lead Saturday night -- that coming when a dominant Carl Edwards took over from an almost-as-dominant Kasey Kahne on lap 371 -- conveniently ignoring the veritable smorgasbord of side-by-side racing that took place throughout the field, throughout the night.

If you're interested, you can get Poole's side of the story HERE. If not, suffice it to say that my friend Poole (and others like him, judging from the Monday morning internet chat rooms) somehow missed all the two and three-wide battling that took place at Thunder Valley Saturday night, apparently unable to concentrate without the constant sensory bombardment of a multi-car pileup every 8-12 laps.

They went to Bristol expecting the WWE to break out, as it usually does. Instead, they were forced to watch a darned good, side-by-side stock car race. And they're none too happy about it, believe me.

For all its volume, however, the "boring race" argument doesn't hold any water.

A quick look at NASCAR’s Loop Data -- compiled and released to the media after every Nextel Cup race -- reveals that a total of 2,147 green flag passes took place Saturday night. That compares to just 991 passes in the "Food City 500" there earlier this spring. For the mathematically impaired like myself, that's a 108-percent increase in green-flag passing from spring to fall.

Back in the spring, Kevin Harvick started 40th and finished fourth at Bristol, passing a race-best total of 52 cars along the way; more than anyone else on the track. That total would have tied him for 18th Saturday night, far behind J.J. Yeley's race-high total of 107.

Sorry folks, but the facts don't lie. Saturday night's race was a good one, despite offering up "only" eight caution flags for the demolition derby set to enjoy. The packed Bristol grandstands may not have had a dastardly "dump and run" winner to boo when it was over, but that does not mean they didn't see a good race. 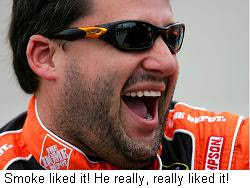 Fourth-place finisher Tony Stewart -- frequently second only to Poole on the list of NASCAR insiders most in need of a bran muffin -- said of Saturday's race, “It’s the most fun I've had at Bristol in my career. I can't give it a better grade than an A-plus."