Batten Down The Hatches, It's Going To Be A Crazy Week

I spent Sunday afternoon at my favorite local short track; Thunder Road International Speedbowl in Barre, VT. Before I had made it to the pit gate at 9 AM, a fan asked, "Who do you think was at fault in the Kyle Busch/Dale Jr. crash last night?"

"I don't think it was anyone's fault," I replied. "But I know who's going to get blamed!" 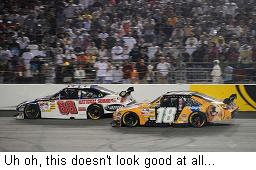 Junior and Kyle said essentially the same thing in their respective post-race interviews. Saturday night's late-race tangle was unfortunate, it was regrettable, and it was a racing accident. That view was echoed by eventual winner Clint Bowyer, who had the best view of anyone in the house, and by every TV and radio commentator on site.

The fan reaction, of course, was completely different.

By the time Sirius NASCAR Radio hit the air with it's Post-Race Show mere minutes after the checkered flag, the indignant inhabitants of Earnhardt Nation were lined up 10-deep to vent their collective spleen. Kyle Busch, they said, was Charles Manson, Adolph Hitler and the Unibomber; all rolled into one skinny, detestable little package. They called on NASCAR to throw him out of Saturday night's race, suspend him for his transgressions, or better yet, take him out behind the trailer and have him shot.

It continued for the remainder of the evening, and ramped up again the moment the phone lines reopened on Sunday morning. I'll bet the mortgage that Mike Bagley and David Poole will fill the Monday morning hours with it on "The Morning Drive," followed by four more hours of venom on "Tradin' Paint" with Steve Post and Chocolate Myers. Then it'll be my turn on "Sirius Speedway."

I know what's coming, and I have prepared myself in advance for it:

Caller #1 will ask (with great indignance) when NASCAR is going to "do something about Kyle Busch."

Caller #2 will announce that he Tivo'ed Saturday night's race, and that after 167 viewings of his personal, super-slow-motion replay, he has determined that Busch intentionally turned right to wreck Earnhardt.

Caller #4 will opine that Mr. and Mrs. Busch are horrible parents, since both Kurt and Kyle are immature, egotistical, and the greatest threat to our American way of life since the atomic bomb.

Caller #5 will accuse me of being a Kyle apologist; adding that everyone he knows agrees that Busch intentionally took Earnhardt out, and that I am nothing more than a NASCAR mouthpiece.

I will remain calm, composed and tolerant throughout my four-hour ordeal, understanding that at the very least, this most recent controversy will sell a crapperload of tickets for next Saturday night's race at Darlington Raceway.