Tony Stewart commented yesterday on the rumors surrounding his possible departure from Joe Gibbs Racing, and his alleged dissatisfaction with JGR’s offseason move from Chevrolet to Toyota. 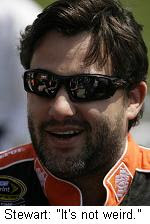 The two-time NASCAR Sprint Cup Series champion appeared at Indianapolis Motor Speedway Wednesday to help Chevrolet introduce its new midget engine, and while admitting that Chevrolet’s support of his various short-track teams constitutes a personal endorsement of sorts, he scoffed at the suggestion that he is unhappy driving a Toyota for JGR.

"It wasn't weird when we started the (short track) program…and it's not weird now,” he said. “When we started our program, Mopar provided us with engines, and both sides understood."

Stewart once again confirmed that he is talking with other teams about leaving JGR when his contract expires at the end of the 2009 season, and that he has broached the topic of terminating his deal with Gibbs a year early, if the right offer comes along. He also discussed his longtime dream of winning the Indianapolis 500, saying that he doesn’t see a return to Indy happening in the near future.

"I don't know if I'll ever get in an IndyCar again,” he said. “But if that happens, it's going to be a long way down the road, because I have a lot of commitments on the NASCAR side. There's a part of me that thinks running at Indy and in IndyCar is a chapter of my life that is closed. Then there’s the emotional part of me that says, 'Never say never.'”

Stewart said he is not interested in a one-off Indy 500 bid, adding, “I don't want to…show up for the month of May. If I am going to do it, I need to start (in the season opener) at Homestead. I need to run all of the races leading up to the month of May, to really feel like I am being fair to the team and being fair to myself. As long as I'm driving a stock car, that basically takes that part of it out of the equation."
Posted by Dave Moody at 11:32 AM