Pot Outbreak In The Cup Garage

There was a whole lot of pot running around the garage Saturday night at Richmond International Raceway, and it had nothing to do with NASCAR's embattled substance abuse policy. Rather, it was a case of two "pots" calling the kettle black, in their rush to condemn the late-race actions of Kyle Busch. 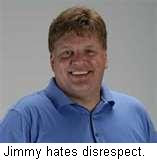 "Pot #1" was old friend Jimmy Spencer, who blasted Busch on SPEED's weekly post-race program. As winner Clint Bowyer sprayed champagne in the background, the analyst formerly known as "Mr. Excitement" laid Busch out in lavender, saying the Joe Gibbs Racing driver "made a major, major mistake. He drove in the corner too hard, and he took out Dale Junior. That is...disrespect for your fellow competitor. He did not respect Junior enough to back down a little bit."

Spencer also took the NASCAR On FOX broadcast team of Mike Joy, Darrell Waltrip and Larry McReynolds to task, accusing them of "political correctness" for categorizing the Busch/Earnhardt incident as a simple racing accident.

With all due respect to Spencer, I'm old enough to remember just about all of his racing career. I watched Jimmy race modifieds around the northeast, before he got the call to the upper echelons of NASCAR. I also saw virtually every race of his Nationwide and Cup Series careers. Nowhere in that 25-year span do I recall Jimmy Spencer ever "backing down" from a battle for the lead, especially with less than two laps to go.

The Jimmy Spencer I remember would rough you up, push you aside, even spin you out if that was what it took to win. He'd also blacken your eye in Victory Lane if you cared to discuss it further. It wasn't "disrespect" with Jimmy. It was good, hard, testosterone-rich racing; something Spencer did as well as anybody out there in his day, and something Kyle Busch is pretty good at today. 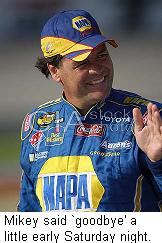 "Pot #2" was Michael Waltrip, who blasted Busch with both barrels on Monday night's This Week In NASCAR. "You can't just be that irresponsible," said Waltrip, as footage of the Busch/Earnhardt crash rolled. He called Busch's actions "unacceptable behavior," adding, "You can't just run over the leader and wreck (him)."

Amazingly, this is the same Michael Waltrip who had been thrown out of the race by NASCAR just hours before, for intentionally crashing Casey Mears.

Thankfully, Hendrick Motorsports crewchief Chad Knaus was on Monday night's panel as well, and provided a much-needed dose of balance. "Just because (Kyle) has a bit of a cloud around him right now, I don't think you can throw the whole Junior Nation at him," Knaus said.

When the topic eventually turned to Waltrip's own Saturday night transgressions, he attempted to lay the blame on Mears, who triggered Mikey's high-horsepower tantrum by squeezing him into the wall moments before. "What you expect at that level is someone to not make that mistake," sniffed Waltrip, conveniently overlooking the smoke billowing off his rear tires as he pushed a helpless Mears the length of the straightaway.

It wasn't pot smoke, in the literal sense of the word. But it was ironic, in the extreme.

UPS Laying Low For Now: After being linked with a number of different drivers and teams in recent weeks, officials of United Parcel Service released a statement yesterday, saying that they are not currently negotiating with any Sprint Cup team or driver.

Michael Waltrip Racing Vice President Cal Wells said recently that UPS has had preliminary discussions with a half-dozen teams about the 2009 season, and beyond. Roush-Fenway Racing President Geoff Smith confirmed that Saturday, saying that UPS has spoken to a total of six or eight race teams, including Roush-Fenway.

But yesterday, UPS Director of Sponsorship and Events Ron Rogowski said, “As of this date, UPS is not engaged in formal, active sponsorship negotiations with any NASCAR Sprint Cup driver or race team.”

For those of you who don't speak corporat-ese, Rogowski's comments loosely translate to, "Listen guys, we don't want to have to answer questions every two days for the next six months. We're out there, we're looking, and we have talked to a bunch of teams, but we haven't decided what we're going to do yet.