Boo Who? Burning Busch Tempered By The Flames

Kyle Busch has taken a lot of heat lately.

Since crashing Dale Earnhardt, Jr., out of the lead with just over a lap to go at Richmond International Raceway last Saturday night, NASCAR's most controversial driver has baked in a crucible of public scorn. That kind of heat does one of two things to a person. Either they melt, or they become tempered to a strength they could never have imagined. 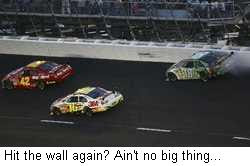 The Joe Gibbs Racing driver overcame loose lug nuts, numerous bouts with the wall, and challeges froma handful of determined competitors to conquer the legendary Darlington Raceway Saturday night; his third Sprint Cup win of the season and his eighth of the year in NASCAR's top three series'. The fans boooed lustily as he cut his requisite victory donuts, then amped it up another notch as he emerged from his battered Toyota in Victory Lane. It got seriously loud when he delivered a flourishing, exaggerated bow to the packed Darlington grandstands, saying that the louder they hooted, the faster he would drive.

"I don't care (about the booing)," he said. "I'm here to win. If I win, it just makes them more upset and crying on their way home. Somebody threw a beer can at me. Next time, just make sure it's full so I can enjoy it out there."

Busch is equal parts Cassius Clay, John Rocker and a young Darrell Waltrip; dominating the competition the way very few ever have, then spouting off with a reckless abandon seldom (ever) seen in today's squeaky clean, sponsor-friendly NASCAR. Love him or hate him -- and there are plenty of folks on both sdes of that particular fence -- it's difficult to deny his talent, or ignore the impact he has made on the sport. His eight victories are far and away best of any NASCAR driver this season. He has won in something -– from Late Models to Trucks to Nationwide to Sprint Cup -– in each of the last six weekends, and that streak does not appear ready to end anytime soon.

All Labonte, All The Time: If the sponsors approve, it looks like Petty Enterprises could field an all-Labonte team next month, with Terry Labonte joining brother Bobby in a Petty Dodge when Kyle Petty heads to the TNT television booth for the midsummer stretch.

Petty will drive in next weekend’s Coca-Cola 600 at Lowe’s Motor Speedway, with Terry Labonte and Chad McCumbee then splitting time in the car over the next seven races. McCumbee is tentatively scheduled to drive the car at Dover and Chicago, with Labonte handling the other five races.

Labonte would be the most recent former champion not in the Top 35 in owner points, guaranteeing him a starting spot in all five events. The Labonte Brothers have run as teammates once before, when Terry ran five races for Joe Gibbs Racing in 2005.

No Rest For The Weary: The NASCAR Nationwide Series is off this weekend for only the second time since Daytona, but a majority of the teams will spend the week testing at Lowe's Motor Speedway. More than 40 drivers from 20-odd different teams are expected to participate in the fourth scheduled Nationwide Series test of the year.

In other testing news, Goodyear has scheduled a tire test at Daytona International Speedway tomorrow and Wednesday, in preparation for the 50th Annual Coke Zero 400 on Saturday night, July 5th. Defending race winner Jamie McMurray will join Mike Skinner and Elliott Sadler as test drivers. No Chevrolet team will take part in this test, as part of Goodyear’s regular manufacturer rotation.

And Finally... If you’re in town for All-Star week at Lowe’s Motor Speedway, you might want to check out the NASCAR Collector Memorabilia Show presented by the Racing Collectables Club of America, Saturday at the Embassy Suites, just down the street from Lowe’s Motor Speedway. 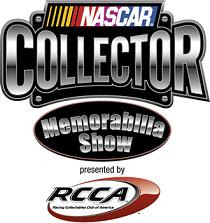 The show features collectors from all over the country; buying, selling, trading and display everything from die-cast cars and trading cards to racecar sheet metal and more. The show runs from 7 a.m. to 4 p.m., and is open to the public. Tickets at the event are $10, but free tickets can be printed at goracing.com.

A number of NASCAR stars are scheduled to appear, includng Kasey Kahne, Rusty Wallace, “Humpy” Wheeler, Junior Johnson and Terry Labonte. Sirius NASCAR Radio’s NASCAR Collector will originate live from the show from 7-9 a.m., with hosts Mike Storms, Buzz McKim, Tim Trout and Howard Hitchcock. Yours truly and The Morning Drive’s Mike Bagley will emcee the live events throughout the day, so come on out and say hello.
Posted by Dave Moody at 11:47 AM