Red Horse Racing has closed the doors on its #1 Toyota Tundra, team effective immediately. The move will sideline former series champion Johnny Benson, who has raced without sponsorship this season after an expected sponsor fell victim to the struggling economy during the offseason. Red Horse will continue to field its #11 Toyota driven by TJ Bell, which enjoys some financial backing from Bell and his family.

Red Horse Racing co-owner Tom Deloatch told Sirius Speedway Monday that he continued to field Benson's #1 Toyota until it no longer made financial sense to do so. "When the (financial) tide starts to drop, you have to start throwing things overboard to keep the ship from running aground." 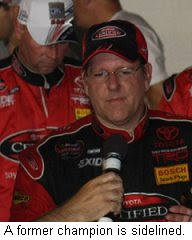 There is no official word on Johnny Benson’s future in the Camping World Truck Series, but there are unconfirmed reports that Toyota is attempting to place Benson with another Truck Series team. Talk in the Truck Garage Friday night centered on Randy Moss Motorsports, which already fields a pair of Tundras for Mike Skinner and rookie Tayler Malsam. A spokesperson for Randy Moss Motorsports told Sirius Speedway today that team owner David Dollar only learned of Benson's release at noon Monday.

Cuts At RPM, Penske Says All Is Well: Jenna Fryer of the Associated Press is reporting that Richard Petty Motorsports has laid off nine employees and cut salaries for virtually all of their remaining staff.

The move comes as a result of what the team says are shortfalls in financial support from Dodge, in the aftermath of Chrysler's recent bankruptcy filing. RPM officials are reportedly anticipating significant monetary cutbacks from Dodge, and co-owner Richard Petty said last week that the bankruptcy has already slowed the flow of cash into the team.

Fellow Dodge team owner Roger Penske said Sunday that said Dodge has continued to support his team fully in recent weeks. Penske said Dodge “paid the bills we submitted to them, and they're on time. I don't know what (Petty) is talking about."
Posted by Dave Moody at 5:28 PM