NASCAR filed a motion in federal court yesterday, claiming that an expert witness cited by Jeremy Mayfield falsified his credentials. 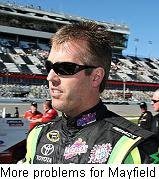 Mayfield’s attorneys used the statements of Dr. Harvey MacFenerstein to argue that their client should be immediately reinstated for competition, but NASCAR alleged yesterday that MacFenerstein misrepresented his medical degrees, certifications and other qualifications in that May 29 affidavit.

In the filing, MacFenerstein claimed to have received a Bachelor of Science degree in medical technology from Midwestern State University of Texas, an MD in clinical pathology from CETED University in Mexico and certification as a Medical Review Officer from two different clinical agencies.

NASCAR refuted each of those claims, after a search of Midwestern State's records produced no documentation that MacFenerstein had ever received a degree from the university. In fact, a spokesperson for the university registrar's office offered sworn testimony that "a Harvey Mac Fenerstein briefly attended ... some classes" during just one semester in 1976.

NASCAR has asked that Mayfield's legal team be sanctioned for failing to conduct a "reasonable inquiry" into MacFenerstein's qualifications. Mayfield's lead attorney, Bill Diehl, has until July 6 to respond to the latest allegations.

Carroll Still Won't Quit: Former Kentucky Speedway owner Jerry Carroll says he expects the appeal of his antitrust lawsuit against NASCAR to continue for at least another month, if not longer.

New owner Bruton Smith has repeated asked Carroll to drop his appeal, opening the door for NASCAR to grant him a Sprint Cup Series race at the track next season. But Carroll and his group have refused to do so, and Smith said Saturday that he is not optimistic about his chance for a race in 2010.

If Carroll and company win their appeal, the case would go to trial, potentially delaying the process for years.

Despite that injury, Scott plans to compete in Friday night's Copart 200 at the Milwaukee Mile.

Scott said he was injured when the steering wheel wrenched from his hand on impact, adding that he knew he was hurt almost immediately. He called the crash, “the hardest hit of my career,” but said he will travekl to the Milwaukee Mile this week and “make the most of the situation."

Double Duty For Shrub: Kyle Busch and Scott Speed will drive for Chip Ganassi Racing in the Grand-Am Rolex Series Brumos Porsche 250 at Daytona on July 4.

The pair will make their Grand-Am debuts in the #02 Lexus Riley; a team car to the #01 fielded for defending Series champions Scott Pruett and Memo Rojas. The race will take the green flag at 2 p.m. ET, with Busch then taking part in the Coke Zero 400 NASCAR Sprint Cup Series race later that evening.
Posted by Dave Moody at 1:17 PM