Kahne To Toyota In August; RPM Will Field Two Makes Of Cars

Sirius Speedway has learned that Richard Petty Motorsports will begin fielding Toyotas for driver Kasey Kahne in mid-August, with at least part of the team remaining in Dodge livery for the time being. 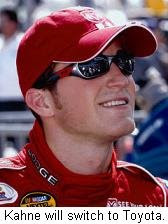 Published reports this week claimed the team will begin fielding Toyotas for Kahne at Chicagoland Speedway on July 11, but an RPM source speaking on the condition of anonymity tells Sirius Speedway that the change will not happen until team officials are able to hammer out a financial settlement with their current manufacturer. RPM co-owner Richard Petty confirmed recently that there has been a dramatic reduction in manufacturer support to the team as a result of Chrysler’s recent bankruptcy reorganization, a fact confirmed by multiple sources.

“Dodge owes the team a ton of money, and they’re trying to negotiate some kind of settlement right now,” said one source. “Until that’s done, the team cannot make a move. Once the settlement is signed, you’ll see Kasey Kahne in a Toyota.”

RPM’s familiar #43 – driven by Reed Sorenson – will remain in Dodge livery for the foreseeable future. “Richard Petty is extremely loyal to Dodge, and the #43 will remain a Dodge,” said the source. “RPM has enough parts and pieces to put new, Dodge R6 engines in one car, and it will be the #43.”

A decision on future manufacturer affiliations for the #19 and #44 cars -- driven by Elliott Sadler and AJ Allmendinger – is pending, and could depend on whether a favorable settlement can be reached between RPM and Dodge. There has been no comment from officials for either Dodge or Toyota, Richard Petty will join us Tuesday to discuss the reports.
Posted by Dave Moody at 1:40 PM