COMMENTARY: A Word Of Praise For DEI-Ganassi Racing

While most of the championship attention continues to focus on Jimmie Johnson and Mark Martin, Juan Pablo Montoya and DEI-Ganassi Racing with Felix Sabates have inserted themselves solidly into the title debate, authoring a Cinderella story that few could have predicted even a few short months ago.

Coming into the 2009 season opener at Daytona, DEI-Ganassi was fresh off a corporate merger that many observers characterized as a reshuffling of deck chairs on the Titanic. Chip Ganassi is a perennial title contender in the IRL IndyCar ranks, but his sole bid for the Sprint Cup title came more than a decade ago with Sterling Marlin at the wheel. DEI, meanwhile, was best known as the team that let Dale Earnhardt, Jr., get away; a move that prompted former series champion Tony Stewart to predict that the team would be “a museum” within 24 months. For his part, Montoya was coming off a 2008 season highlighted by an unremarkable 25th-place finish in points, inciting debate over whether the former open wheel star would ever fully adapt to stock car competition, and whether there was any future at all for DEI-Ganassi.

The nay-sayers could not have been more wrong.

After a halting start that saw them finish 14th, 11th, 31st and 27th in the first four races of the season, Montoya’s Target Chevrolet team slowly began to right the ship. By the time NASCAR rolled into Charlotte for its annual midseason All-Star festivities, the former Indianapolis 500 champion had climbed all the way to 14th in points and begun to be included on the list of possible Chase contenders. 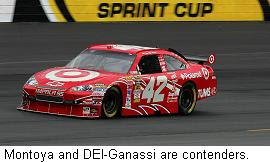 In the last 15 races – dating back to Pocono in June – Montoya went from “possible Chase contender” to “legitimate championship aspirant,” ripping off 10 Top-10 finishes with only one result outside the Top-20. His average finish in that span is 9.5; enough to place him third in points heading to Round Three of the Chase this weekend at Kansas Speedway.

Montoya faced criticism in some circles for “points racing” during the final few races of the regular season; eschewing his usual aggressive style in favor of a big-picture-friendly approach that stressed Top-10 finishes over wins.

Now, however, the reins have clearly come off.

Asked if he would continue preaching patience and consistency yesterday at Dover, crewchief Brian Pattie snapped, “We stopped points racing three races ago. We’re here to win.” Montoya sang a similar tune, saying, “We accomplished our goal when we made the Chase. Everything from now on is a bonus, and we’re going for it.”

This has already been a coming-of-age season for both Montoya and his team. There is still work to be done at DEI-Ganassi Racing, but JPM's unexpected title bid has given them a solid foundation to build upon.

Martin Truex, Jr., will still jump ship at season’s end for a new ride at Michael Waltrip Racing, leaving the team’s #1 Chevrolet vacant. Jamie McMurray is rumored to be waiting in the wings to fill that seat, but the deal (like most others these days) is contingent on the acquisition of a sponsor.

Young Jeffrey Earnhardt -- grandson of the late Dale Earnhardt and nephew of Dale, Jr. -– is being touted for a full season of Sprint Cup competition as soon as 2011, but is currently an unproven commodity whose resume is highlighted only by a partial season of Camping World Series East racing two years ago.

For now, DEI-Ganassi Racing can take pride in proving the doubters wrong. They have not only survived, they have thrived; arguably outperforming more traditional NASCAR juggernauts like Richard Childress and Roush-Fenway Racing.

That’s something to be celebrated, and it’s not over yet.
Posted by Dave Moody at 1:36 PM