Mayfield: NASCAR Made Me A Scapegoat To Scare Other Drivers

Jeremy Mayfield told ESPN's "Outside The Lines" yesterday that NASCAR is using him to scare his fellow drivers straight. 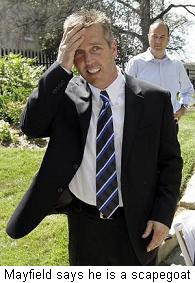 Mayfield said his May 9 suspension for violating the sanctioning body’s substance abuse policy was an attempt by NASCAR to “get the message back to other drivers in the sport, (and) to put the fear of God into them.” He said his suspension “killed two or three birds with one stone, and put the fear of God in other people and other drivers who have tested positive that they didn't put in this situation."

"This was sending a message to them, saying, 'You better straighten your act up,' without putting them through what they put me through.”

Mayfield’s lawsuit against NASCAR is scheduled to go before a jury next September, and NASCAR spokesman Ramsey Poston said of Mayfield’s latest comments, "The facts are clear and now recognized by the court, that Jeremy tested positive twice for methamphetamines. He was offered the chance to undergo the road to recovery but chose to go the legal route."
Posted by Dave Moody at 12:04 PM