Richard Petty Motorsports’ Executive Director of Race Operations Robbie Loomis says the team could field a Ford Fusion before the end of the 2009 season.

Loomis told FoxSports.com’s Lee Spencer, “I don't want to talk about things that are pure speculation, but I don't think it would surprise anybody if we did.” A spokesperson for RPM told Sirius Speedway today that there are no plans to field a Ford before 2010, but off the record, sources inside RPM say that the team has already built at least one Ford Fusion, installing a Ford powerplant in an existing RPM chassis. 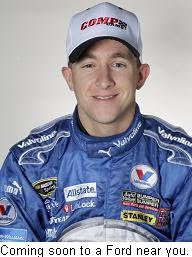 Initial plans were to have AJ Allmendinger debut the car at Kansas Speedway next week, but that timetable was pushed back when Roush-Fenway Racing's Jack Roush expressed reservations about the quick ramp-up. Now, tentative plans call for Allmendinger to drive a Richard Petty Motorsports Ford at Talladega Superspeedway on November 1, with additional outings possible -– though not certain –- at Texas, Phoenix and Homestead-Miami Speedways.

Loomis also confirmed today that Reed Sorenson is not the first RPM driver to race for free, saying that Allmendinger also waived his paycheck for a time, in order to remain on the racetrack.