Labonte Back In The Game; Signs For Seven Races With TRG

Just days after Bobby Labonte had his schedule with Yates Racing trimmed by seven races in favor of youngster Erik Darnell, the 2000 series champ has inked a deal to drive the TRG Motorsports #71 TaxSlayer Chevrolet in those seven events. 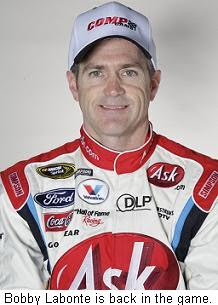 Labonte will be in the car this weekend at Atlanta Motor Speedway, keeping his lengthy consecutive-race streak intact. David Gilliland will drive the #71 car in the races Labonte does not run. TRG owner Kevin Buckler said recently that he would like to expand his operation to two cars next season, and with the Labonte/Hall Of Fame Racing/Ask.com tandem unlikely to renew its deal with Yates Racing for another year, the possibility exists for TRG to step in and fill the void.

The move puts Labonte on the list of Past Champion’s Provisional-eligible drivers for this weekend’s race, along with older brother Terry (the 1996 and 1984 champion) and Bill Elliott, who wore the crown in 1988.

With Brad Keselowski moving to Penske Racing next season, the seat in the #88 Chevrolet will be vacant. And while Kelly Bires is widely reported to be the leading candidate for that ride, Davis declined to comment on specifics of the search. He did say that Jr Motorsports would like to run both the #88 and #5 teams will full-time in 2010, pending sponsorship. Dale Earnhardt, Jr. will drive the #5 in several events.

Kahne Suit Dismissed: The lawsuit filed by a Homestead-Miami Speedway security guard against driver Kasey Kahne has been dismissed. 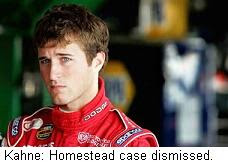 Security guard Archibald Hutchinson alleged that Kahne shoved him to the ground during the final weekend of the 2007 season at Homestead, leaving him with injuries that prevented him from working. Kahne maintained his innocence from the outset, and a misdemeanor battery charge was dismissed back in June.

Miami-Dade County court records show that Hutchinson’s civil suit against both Kahne and NASCAR was dismissed on August 24.

The sanctioning body announced that it will introduce a "Learner's Permit License" for drivers as young as 14, dropping the minimum age from the current 16 years of age. The NASCAR Whelen All-American Series awards national championship points at more than 55 short tracks across North America, with over 10,000 drivers taking part each year.
Posted by Dave Moody at 1:46 PM