France Says NASCAR Will Not Negotiate With RTA 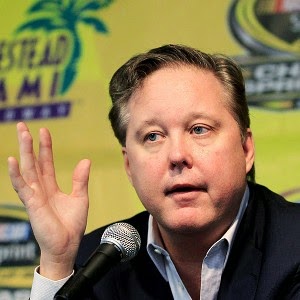 While he will continue to seek input from individual team owners, he has no interest in speaking with the newly formed Race Team Alliance.

"The worst thing that we could ever do is listen to one voice, even if it was a consensus voice," he said. "Every decision we've ever made that's important -- the more input (and) the more people we’ve heard from -- the better the results. That will never change in the business model of NASCAR, because good ideas come from all over the place."

RTA chairman Rob Kauffman has insisted that the alliance will concentrate on “low hanging fruit,” trimming expenditures for travel, hotel accommodations, rental cars and insurance. France endorsed those efforts, saying, “They’re smart guys, they may figure out some things that we’re not aware (of). They’re entitled to approach their business in certain ways (and) we’re going to respect that.”

France said NASCAR “didn't think (the RTA) was necessary," adding, “we think the benefits they will arrive at with this association will be much smaller than they do."

The RTA has said it has no plans to negotiate for a larger share of the new, 2015 television contracts. Under the current deal, 65% of all TV revenue is distributed to speedways, with teams getting 25% and 10% going to NASCAR. France said those percentages will remain unchanged, saying they are “set for historical reasons and because it’s the right allocation. Everybody would like to have more. The tracks would, anybody else would. That’s natural. I think they’ve made mention that they don’t have any desire to do that (and) we’re business as usual."

He also insisted that NASCAR will continue to deal with individual team owners, rather than a chosen spokesman.

"We need all the input we can get,” he said. “That's the whole beauty of the NASCAR business model. Everybody's in it together. We’re going to go down the road of dealing with all the team owners.