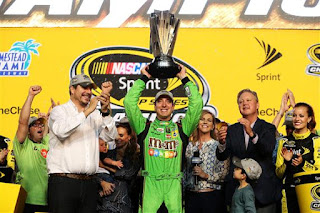 Kyle Busch celebrated his first career NASCAR Sprint Cup Series championship Sunday evening at Homestead Miami Speedway, completing one of the greatest comebacks in the history of professional sports. And even before the final scraps of confetti had fluttered to earth, a small-but-determined group of naysayers was already at work, attempting to minimize his achievement.


As the Joe Gibbs Racing driver smiled for the cameras in Victory Lane, a joyless cadre of Busch bashers began attaching undeserved asterisks to his unlikely championship season, based on a horrifying injury that forced him to miss the first 11 races of the 2015 campaign.


Busch’s title drive appeared to be over before it began, after a high-speed crash into an unprotected concrete wall during the XFINITY Series opener at Daytona International Speedway in February left him with a compound fracture of his right leg and a broken left foot.
As the Las Vegas native began the arduous task of rehabbing from his injuries, he was granted a waiver by NASCAR Chairman and CEO Brian France, who accepted personal responsibility for not mandating full SAFER barrier protection at the sport’s most storied venue. France did not change the rules, he simply invoked a clause that has been a part of the Chase format from the beginning; foregoing the “must attempt every race” requirement due to unusual, extenuating circumstances. 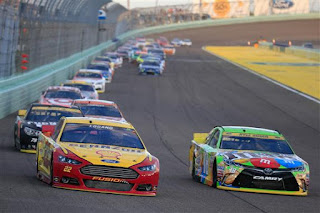 That waiver did not lower the competitive bar for Busch. In fact, it did just the opposite, challenging him to accumulate more points in 15 regular-season races than his competition could in 26. He did so with ease, cracking the Top-30 with many weeks still remaining in the regular season and winning four times to punch his ticket to the playoffs.
Busch is not the first driver to be granted such a waiver. Tony Stewart earned similar consideration after missing three races following the death of Sprint Car driver Kevin Ward, Jr. in 2014. Kurt Busch was granted a similar waiver earlier this year, after sitting out an early season suspension related to domestic violence charges leveled by former girlfriend Patricia Driscoll. Stewart failed to qualify for the Chase last season. Kurt Busch made the Chase this year, but was unable to advance to the Championship Round at Homestead Miami Speedway.
Only Kyle managed to clear all the obstacles and advance to the title round. And once there, he and his M&Ms Toyota team were simply unstoppable. He paced his fellow title contenders for most of Sunday’s race, before overwhelming leader Brad Keselowski on a final restart and driving away to a decisive, undisputable victory that earned him an opportunity to hoist the Sprint Cup Series championship trophy at long last.
Sunday, Busch put an exclamation point on his likely Hall Of Fame career; winning his 34th Sprint Cup Series race, to go with a record 76 XFINITY Series scores and 44 checkered flags in Camping World Truck Series competition. At age 30, NASCAR’s self-described “King of the Minors” delivered a fourth Sprint Cup title to Joe Gibbs Racing and the first to his longtime manufacturer, Toyota. 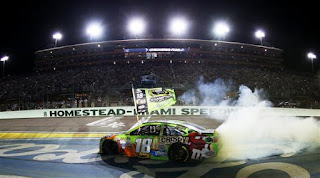 “It’s pretty unbelievable,” said Busch in a raucous Victory Lane that included a downpour of M&Ms. “It’s a dream of a lifetime, a dream come true. I just can’t believe it, with everything that happened this year; all the turmoil that I went through, all that my wife and the people around me went through."
Busch called the weeks following his Daytona crash “the hardest thing I have ever gone through” adding, “You don’t know how many times I wanted to stop. I guess you’re a lot tougher than you really realize, physically and mentally. I had to put everything I had into rehab, and into being able to walk.
“I was trying to get prepared for my son’s birth,” he said, “and make sure I could… stand and support Samantha and not worry about being in a wheelchair, stuck on the side of the room."
Cradling son Brexton, a beaming Samantha Busch concurred, saying, “I don’t think people know how hard he worked (and) what we both went through this year. From trying to get pregnant, to the accident, to fighting his way back. It’s just a storybook year. I’m so proud of Kyle and the team.”
In 2015 – at long last – Kyle Busch found a way to slay his personal demons. This time around, there were no petty distractions, no disputes with fellow drivers or his own race team. His on-track talent shined through, as it always has. But this time, that talent was bolstered by a newfound maturity, focus and professionalism.
It made all the difference.
Busch’s path to the 2015 championship was anything but smooth. A 37th-place finish in the second race of the Chase at New Hampshire Motor Speedway but him behind the eight-ball. In past seasons, such a result would have sent Busch on a downward emotional spiral and crippled his championship dream.
This time, though, Busch did not come unraveled.
This time, he dug deep, earning a pressure-filled runner-up finish the following week at Dover that cemented his status as a championship contender.
“I leaned on Kyle Busch pretty heavily,” said first-year crew chief Adam Stevens Sunday. “You just have to get him close. That’s the beauty of Kyle and his talent, skill and dedication. His feedback is so good that I think anybody could adjust on his car. I’m thrilled to be a part of Kyle Busch’s career. He’s a future Hall of Famer, and to be anywhere close to him is amazing for me.”
Even vanquished title contender Jeff Gordon spoke of Busch’s transformation, saying, “I don’t know if ‘grow up’ is the right term. But with what he went through this year, I see a changed Kyle.
“When he came back… you could tell he was racing smarter, with more patience, being more deliberate. Between having a baby, what happened to him at Daytona and the time with his wife; I think he had a lot of time to think about things. He came out of it even better than he was before, and he showed it right away.”
No asterisks, no qualifiers, no ifs, ands or buts.
Just a changed man, basking in the glow of a destiny fulfilled.