Bye Bye Baze: As we predicted some time ago, NHRA Funny Car driver Whit Bazemore will not finish out the season at the wheel of Don Schumacher Racing's Matco Tools Dodge Charger Funny Car.

Schumacher announced today that Top Fuel and Sportsman driver "Fast Jack" Beckman will replace Bazemore at this weekend's Toyo Tires NHRA Nationals at Maple Grove Raceway, and for the remainder of the 2006 POWERade Series. The Matco Tools Funny Car will retain its sponsorship through the end of the season.

Schumacher announced the move, saying, "It was a very difficult decision to make. When Matco Tools informed me at the U.S. Nationals that it was moving to another team for the 2007 season, I was left with little choice but to look at my options for 2007 and beyond. I had already been in discussion with Jack for a number of months, as we were attempting to find a way to work together. When Matco Tools made its surprise announcement, I had to look towards the future, which helped me decide to place Jack in the Matco Tools Funny Car before the end of the season.”

Bazemore predicted the move yesterday, saying, "Nothing's been confirmed, but it looks unlikely that I'll be in Reading, or any other races this year unless something changes. I'm not upset at Don. I understand that he's doing what he has to do to keep the team properly funded. It's business, and I'm okay with that."

Bazemore’s revelation represents the latest turn in a story that saw Matco Tools announce that they will leave the Schumacher team at the end of the season, in favor of the new Top Fuel entry fielded by David Powers. Bazemore is rumored to be the top choice to drive that car. 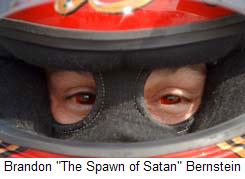 Bad Case Of Red-Eye: Brandon Bernstein's latest "look" has nothing to do with hair color, eyebrow waxing, or any of the other metrosexual grooming procedures we take so much delight in lampooning. Instead, it stems from a pair of red contact lenses, whuch Bernstein believes help him see (and react to) the starting line Christmas Tree better than he has before.

Bernstein advanced all the way to the finals at the NHRA U.S. Nationals in Indianapolis two weeks ago, before bowing to defending World Champion Tony Schumacher. Papa Kenny Bernstein -- who announced at Indy that he will return to the Funny Car wars next season in a flopper sponsored by Monster Energy Drink -- said the contacts made his son look like "an evil bug," and while the oversized crimson lenses do give Brandon a decided "Spawn Of Satan" look, it's results that count.

Flavio Briatore Is A Big, Fat Pansy: Just 48 hours after saying that the Formula One championship is rigged in favor of rival Ferrari, Renault team principal Flavio Briatore has now wussed out, saying his comments were taken out of context.

In the aftermath of a controversial qualifying penalty assessed to driver Fernando Alonso, Briatore said Sunday, "It has all been decided. They have decided to give the world championship to Schumacher, and that is what will be." Sunday's comments marked the second time this season that Briatore has alleged that the F1 "fix" is in, and Formula One's governing body reacted as one might expect. The FIA immediately said it would investigate Briatore’s remarks, hinting that he may be brought up on charges of bringing the sport's reputation into disrepute.

Today, Briatore put his tail between his legs and did an abrupt about-face, saying, "The comments which have been attributed to me in the press have been completely taken out of context. A joke remark has been turned into something it was not intended to be." 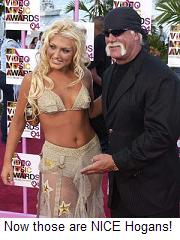 With Lungs Like That, She MUST Be Able To Sing: Brooke Hogan will sing the National Anthem prior to next weekend’s NASCAR NEXTEL Cup race at Dover International Speedway. The pop singer and co-star of VH1's reality TV show "Hogan Knows Best" currently has two singles on the Billboard Pop 100 chart, including "Everything To Me," which peaked at No.1 recently.

Ms. Hogan -- who is quite the looker -- will be accompanied by her family at Dover, including her father; former WWE champion Hulk Hogan. I hope to assess her talent with my own eyes at the Monster Mile, if I can slip past her ridiculously overprotective (and insanely large) father long enough for a quick glimpse.

And Finally: NASCAR has announced the creation of the NASCAR Canadian Tire Series. Scheduled to launch in May of next year, the series includes a multi-year sponsorship agreement with Canadian Tire, supporting a schedule of 10-12 races from May through October. The series will involve teams and drivers from the former CASCAR Series, with a schedule and point fund to be announced at a later date. NASCAR’s purchase of the CASCAR Series has been rumored for nearly two years, and could eventually pave the way for NASCAR to align its new northern sanction with either the NASCAR Busch East and/or Autozone West Series in years to come.
Posted by Dave Moody at 12:34 PM