Hamilton, Jr., Lashes Out At BHR

Bobby Hamilton Jr. delivered some scathing criticism of his late father’s NASCAR Craftsman Truck Series team yesterday here at Daytona International Speedway. In his first major public comments since the death of his father on January 7, Hamilton said he is unhappy with the present state of Bobby Hamilton Racing, adding, “I have washed my hands (of the team) and dried them.” 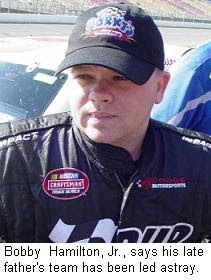 Hamilton replaced his father at the wheel of BHR’s Fastenal Dodge last season, after the elder Hamilton stepped down to begin his unsuccessful battle with head and neck cancer. Hamilton, Jr., said yesterday that he quickly realized things were not what they should be at BHR, causing him to second-guess his decision to return.

"Our leader wasn't around. He was sick, he wasn't up to par," he said. "It was almost like the Titanic, and I was looking for a lifeboat. It’s the not the way he set things up to be. It’s not the way he was running it. You can see that in his absence, things have started to fall apart."

While declining to criticise andyone by name, Hamilton said “recent additions” to the team have led BHR astray. “They’re sinking it, and I just can’t be part of that. There’s people involved in it now that I just don’t like, period. I don’t like how it was run (last season), and I don’t like where it’s going. It can run with its own money. As long as they have racing money, I’ll pat them on the back all day long. (But) you ain’t getting into mine.

He said he expressed his concerns to his father, and also addressed the public perception that BHR should be his one day.

“He patted me on the back and said, `Your name is my legacy. Winning races is what I need you to do.’ When I informed him that I wasn't really happy with the way things were going, he said, `it's not that important.' He said, 'I won my championship. I did what I wanted to do. At the end of the rainbow, it's your deal. You do what you want with it.'

“That's what I'm trying to do,” said Hamilton, Jr. “With everything going on down there, it doesn't make a lot of sense to me. I washed my hands and dried them. I'm done."

In a written statement earlier today, spokesmen for BHR said, “We at Bobby Hamilton Racing are continuing operations with a team of people hand-selected by Bobby Hamilton, Sr. This is the same team of people who helped Bobby win his NCTS championship title in 2004. We have so many members of the NASCAR, Fastenal and Dodge family -- as well as personal friends and family members -- who have confidence in Bobby Hamilton Racing's success in 2007 and beyond. We wish that same success to Bobby Jr.”
Posted by Dave Moody at 12:36 PM