As most of you have heard by now, Marty Hough has left his position as producer of Sirius Speedway to take a new position within the MRN Radio organization. 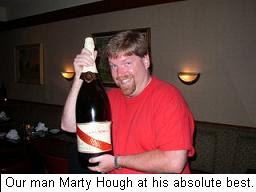 Your first reaction, like ours, was probably one of sadness. After all, Marty has been an integral part of our radio family since Day One, and his hard work and dedication played a major role in making Sirius Speedway the qualified success that it is today. He is excited about the move, though, since part of his new job will be to get back on the road (and back to the track) as a live-event producer for MRN.

That’s great news for Marty, and while we’re sad to lose him, we’re happy that he’s happy.

Ryan Horn will step-in to fill the considerable void left by Marty’s departure, and we couldn’t be more excited to have him. I personally feel like we have replaced Johnny Unitas with Dan Marino; swapping one All-Pro for another. Ryan will do great things for the show, and you’re going to like him a lot. I promise.

For now, though, we’ll simply say, “Thanks Marty, and best wishes.” You will be missed.

Another One Bites The Dust: Burney Lamar tied the knot last Wednesday, marrying supermodel Niki Taylor in front of 60 guests at the Grande Colonial Hotel in San Diego. Taylor, 31, and Lamar, 26, met at a charity event in January of this year, according to Taylor, who told US Weekly, “I looked at Burney and said to myself, 'This is the guy I'm going to marry.'" 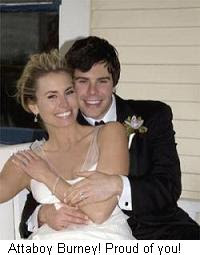 This is the second marriage for Taylor -- who has twin 11-year-old boys from her previous marriage to former football player Matt Martinez -- and the first for Lamar. The betrothal continues a recent trend that bodes extremely well for all unattached NASCAR drivers. First Jeff Gordon married supermodel Ingrid Vandebosch, and now Lamar lands Taylor.

Can Jon Wood and Brendan Gaughan be far behind?

Hopefully, Lamar’s on-track fortunes will take a turn for the better, as well. He made 29 starts last season as a Busch Series rookie with Kevin Harvick Incorporated, recording one top-five and three top-10 finishes before being replaced near the end of the season.

Another Strong Argument For Less Government In Our Lives: The Federal Election Commission announced last Tuesday that it sent what it called an “admonishment letter” to Kirk Shelmerdine Racing in 2004, after team owner Kirk Shelmerdine placed a “Bush-Cheney `04" campaign decal on the rear quarterpanel of his racecar.

Democratic activist Sydnor Thompson complained to the FEC, and the agency found that Shelmerdine, “may have made an unreported independent expenditure or a prohibited corporate expenditure.”

Former FEC commissioner Bradley Smith, who voted against sending the letter, wrote about the decision in an internet blog last week, arguing that Shelmerdine’s decal did not exceed the $250 value limit imposed by the FEC. In his words, “evidence is strong that the market value of Shelmerdine’s rear quarterpanel was approximately $0, give or take $249.”

One can only hope that after receiving his “admonishment,” Shelmerdine sent a letter of his own to the FEC, inviting them to kiss his butt. There were literally thousands of campaign bumper stickers plastered to cars during the 2004 election; each of them perfectly legal. The only thing that made Shelmerdine’s sticker different was its size, and the speed of the car.
Posted by Dave Moody at 10:18 AM