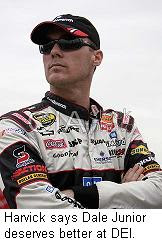 During Richard Childress Racing’s portion of the annual NASCAR Media Tour yesterday in Charlotte, NC, Harvick blasted Teresa Earnhardt, saying, "It's hard when you have what I call a deadbeat owner that doesn't come to the racetrack. You always see Richard Childress. You always see Chip Ganassi. All these owners, they all come to the racetrack. It's not just a money pit that somebody says, 'Well, I can make money off of Dale Jr. I can make money off of Dale Earnhardt.'

Harvick is hardly the first to criticize Teresa Earnhardt for her lack of visability in the Nextel Cup garage. No less than seven-time champion Richard Petty called her an "absentee owner" a few years ago. But just days after admitting that their relationship "ain't a bed of roses," Earnhardt, Jr., came to his stepmother’s defense, calling Harvick’s assessment "ridiculous. 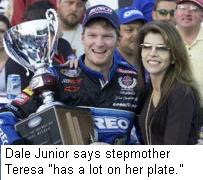 "You're killing me," said a clearly uncomfortable Earnhardt. "I don't think there is a comment for that remark."

He said Teresa Earnhardt has had much to deal with since her husband’s death on the last lap of the 2001 Daytona 500, adding, "with everything that's happened -- not just to the company, but to the family over the past five years -- she's had a full plate. The things that she's responsible for are very important. For a long time, the battle with [my father’s] autopsy photos, all those things, that's just the tip of the iceberg of things that she's been responsible for. That's probably been one reason why she hasn't been as visible at the racetrack. But she's taking care of things that are much [more] important."

For his part, Childress refused to be drawn into the debate over Teresa Earnhardt’s absence from the racetracks, electing instead to praise her widely acknowledged business acumen. "She's a really good businesslady," Childress said. "It's tough for women in this business. For her…to be able to do what she's done since 2001, she's done a phenomenal job.