I’ve said it to myself a thousand times in the last few minutes, and I still can’t make it sound right.

The 2004 NASCAR Craftsman Truck Series Champion lost his battle with cancer Sunday afternoon, and the news of his passing at age 49 rocked the tight-knit NASCAR community to its core. 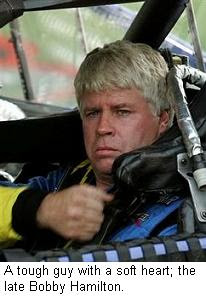 Bobby Hamilton, the toughest sonofabitch I ever met. The guy who quit school and left home at age 13 to live on the mean streets of Nashville, fending for himself and fighting his way to the very pinnacle of NASCAR racing. Bobby Hamilton, beaten by cancer. It just doesn’t seem right.

We hadn‘t heard much from Bobby in recent weeks. The easy explanation was that ongoing radiation treatments had left his throat too sore to talk. We know now that it was much worse than that.

It was less than 10 months ago -- March 17, 2006 -- when he announced that he had been diagnosed with head and neck cancer. Typically, he ran the Craftsman Truck Series race that night, before stepping down to begin therapy the following Monday.

"It's called head-and-neck cancer,” he said. “I don't have anything wrong with my head, but Kenny Schrader said a lot of people would doubt that.”

He had a tumor removed from his neck on February 8, and underwent aggressive radiation and chemotherapy at Vanderbilt Medical Center. From the outset, Hamilton talked like the fighter he was, saying, “I have always been sort of a survivor. I was on the street when I was 13-years old, and eventually got a chance to race with the best racecar drivers in the world.

His son, Bobby Jr., returned home to drive the No. 18 Bobby Hamilton Racing Dodge last season, easing his father’s mind and allowing him to focus completely on his recovery. Unfortunately, it was not enough. Perhaps we should have known, when Hamilton failed to attend a number of races in the second half of the season. He had warned us earlier, saying, “I am going to have to be in bad shape not to be there. I feel out of place if I am not around it. It is going to have to be about death for me not to be there.”

Even with that, though, nobody imagined this as the final outcome.

Not now. Not this. Not Bobby Hamilton. 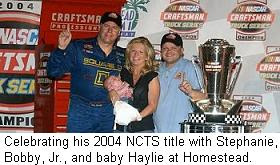 In the days that follow, there will be a lot of statistics thrown around about Bobby’s career; 1991 Winston Cup Rookie of the Year, four NASCAR Cup Series wins, over 100 top-10 Truck finishes and the 2004 Championship. They’re all true, but they don’t come close to telling the real story of Bobby Hamilton. They say nothing of the “tell-it-like-it-is-and-damn-the-consequences” personality, the quick smile and hearty laugh that combined so easily with rotweiller toughness and pit bull determination.

He was tougher than a barrel full of hammers, and if anyone could have beaten head and neck cancer, I thought it would be him. Bobby Hamilton against a speeding locomotive would have seemed like a mismatch, in favor of Hamilton. Bobby against cancer? I almost felt sorry for the tumor.

Unfortunately, I was wrong. We all were. 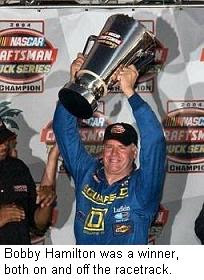 Bobby Hamilton is gone, and the racing world is diminished without him. I can't imagine going through SpeedWeek in Daytona next month without spending a few minutes leaning on the tailgate of his #18 Fastenal Dodge, talking racing, family, and anything else that comes to mind.

All that’s left now is to pray for Bobby, Jr., Stephanie, grandbaby Haylie and new wife Lori. Pray that God will bless them in the difficult days ahead with just a small fraction of the strength Big Bobby displayed every day of his life.

He promised not to quit, saying he was "not that damn weak." He never did, right to the end.