Longtime Indy Racing League team owner John Barnes says the league could do itself a big favor by serving as a support division to NASCAR’s Nextel Cup Series. 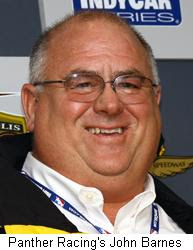 Barnes, part owner and General Manager of Panther Racing, is pushing the idea of NASCAR/IRL combo weekends, saying the Indy Car series would benefit, even if the open wheel machines were sold as a Saturday support event.

"We would make it where we would race on Saturday to replace a Busch or ARCA race, and they would race on Sunday," said Barnes this week. "I have no problem being second fiddle to them, I just want to get in front of their fans and show them what real racing is all about."

Barnes may or may not be on the right track with his proposal. On one hand, racing the day before NASCAR’s Nextel Cup Series would expose the IRL to vast numbers of motorsports fans who currently wouldn’t know an Indy Car from the Space Shuttle. NASCAR puts between 65,000 and 150,000 fannies in the seats each weekend; numbers that dwarf anything the IRL can muster.

Even IRL’s premier event – the Indianapolis 500 – draws a small fraction of the television viewership enjoyed by its Memorial Day Weekend competition, NASCAR’s Coca-Cola 600. The Indy Racing League needs fans, any way it can get them, and an association with America’s most popular form of motorsport can’t help but be of benefit.

Barnes’ desire to show NASCAR fans “what real racing is all about" could prove to be a double-edged sword, however.The Indy Racing League offers a solid on-track product, with three-wide racing and razor-close finishes the norm. Their athletes are personable, well-spoken, and reasonably accessible; all of which could appeal to stock car fans. However, died-in-the-wool NASCAR devotees might have trouble warming up to IRL’s short starting fields. Currently, only 20 drivers appear on the 2007 IRL roster, and at least two of those – Sarah Fisher and newcomer Milka Duno – will run only a partial schedule this season.

After being raised on 43-car starting grids, NASCAR fans may not find much to like in an anemic, 18-car lineup on wide-open speedways like Indianapolis, Kansas, Texas and Watkins Glen.

Also, one wonders why track promoters would choose to book a Saturday IRL event, when the tried-and-true NASCAR Busch and Craftsman Truck Series are available for the asking. The Indy Racing League may be a cheaper date than the Busch Series in terms of its purse requirements, but even a low-dollar Craftsman Truck show is certain to draw at least as many fans as the average IRL event, if not more.

In the end, Barnes’ proposal may prove to be little more than a tempest in a teapot. The new President of IRL's Commercial Division, Terry Angstadt, wasted little time shooting down the plan this week, saying the Indy Racing League would never allow itself to be presented as a support race.

It’s that kind of ego that will keep the Indy Racing League no better than fourth on the list of America’s most popular forms of motorsport.
Posted by Dave Moody at 11:54 AM