Waltrip Says Alcohol Not A Factor In Saturday Morning Crash

The woman who discovered Michael Waltrip's overturned car initially thought that no one had survived the crash, until she saw Waltrip climbing through the window. 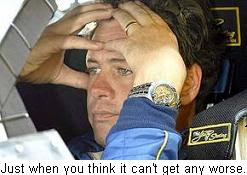 The 18-year-old University of North Carolina-Charlotte student said she came upon the accident scene at about 2 a.m. Saturday, and rushed to check on the occupants after observing the overturned Toyota Land Cruiser in a ditch. When her shouts went unanswered, she called 911 for help.

The witness – who has requested anonymity for fear of backlash from Waltrip’s fans -- said she asked Waltrip how long he'd been in the car, and he told her “about 10 minutes.

North Carolina State Trooper B.L. Buchanan said that after doing an initial assessment of the accident scene, he went to Waltrip's home at approximately 3 a.m., but was unable to locate Waltrip. Buchanan’s shift ended at 5 a.m., but he eventually contacted Waltrip at 8 p.m. Saturday when he returned to duty, charging the Nextel Cup veteran with reckless driving and failing to report an accident. Both charges are misdemeanors.

Waltrip declined requests to appear on Sirius Speedway yesterday, but team spokesperson Brooke Hondros said Waltrip was showering in his pool house when police arrived, and did not hear them at the door. Waltrip has said that he fell asleep at the wheel, and told the Charlotte Observer yesterday that alcohol was not a factor in the crash.

"I didn't go home to avoid anything," he said. "I went there trying to figure out what to do. I feel stupid. I feel like an idiot, because this one is all me."

Waltrip is due in court in Newton, North Carolina on May 14th, and NASCAR Vice President Jim Hunter said the sanctioning body will speak with him about the incident tomorrow at Texas Motor Speedway.
Posted by Dave Moody at 9:50 AM