"Mr. Excitement" Out Of Bounds With Elledge Comments

Speaking on SPEED’s NASCAR RaceDay yesterday, Spencer said of Earnhardt Elledge, “I’m shocked she kept her middle name. You’re married. Why keep Earnhardt? I think her ego is so big. I think she’s backing Teresa and Max in corners. She’s not a good negotiator. If she was working for anybody else, they’d probably fire her. But she’s working for Dale Jr…” Spencer also said that if Dale Earnhardt was still around, he’d be kicking Junior’s butt for even thinking about leaving DEI.

My guess is that if `Big E’ was alive today, the only butt he’d be looking to kick is Jimmy Spencer’s.

Spencer’s criticism was borderline sexist. More important, it was totally devoid of facts. 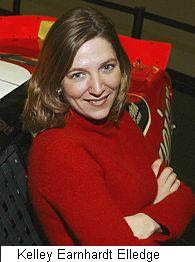 Late last week, Earnhardt Elledge set a 45-day deadline for completion of negotiations, saying, "I don't know if we'll get there. There are a whole lot of dynamics that play into it all. At this point, we don't have a lot of time, so we're trying to work really hard to make something of it.”

Her comments served two purposes. First, they put pressure on DEI to come to the table with its best offer; sooner than later. Second, they ensured that she and her brother will have ample time to examine their options, should the DEI deal fall through. That’s not “backing Teresa and Max in corners,” Jimmy. It’s being a shrewd businesswoman.

It is not Kelley Earnhardt Elledge’s job to negotiate a new contract with DEI. Her job is to negotiate the best deal possible for her brother, wherever that might be. It has become clear in recent weeks that DEI has not kept pace with the changing technological face of NASCAR Nextel Cup racing. The fact that Junior’s Budweiser Chevrolets are routinely taken to the JR Motorsports Busch Series shop to use a chassis pulldown machine – something DEI inexplicably does not own -- attests to that fact. If Teresa Earnhardt has not invested in the equipment and technology necessary to keep up with Hendrick, Childress, Roush and Gibbs, the Earnhardts have every right to look elsewhere for a championship-caliber ride.

As Spencer launched into his anti-Elledge rant Sunday, host John Roberts looked as if he wished he could climb under the table and hide. A brief, lukewarm apology later in the show did little to mitigate the damage.

Spencer’s outspoken bad-boy act has served him well over the years, and most weeks, he provides a refreshing alternative to the politically correct sponsorspeak that passes for analysis in this sport. This time, however, “Mr. Excitement” was far out of bounds. He took a purely business situation and made it personal, for no apparent reason.

Kelley Earnhardt Elledge deserves better than that.
Posted by Dave Moody at 10:49 AM