Red Army Off Base On Gordon Tribute

Jeff Gordon crossed one more track off his personal hit list Saturday night, winning the Subway Fresh Fit 500 at Phoenix International Raceway after a stirring, late battle with Tony Stewart. As he completed his cool-down lap, a Hendrick Motorsports crewman appeared at the pit wall with a large Dale Earnhardt, Sr., flag, unfurling it so Gordon could tour the one-mile tri-oval in tribute to NASCAR’s fallen seven-time champion; whose career mark of 76 Nextel wins Gordon had just tied. 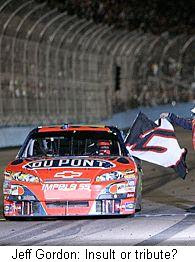 It was a classy gesture from a classy driver and team. Apparently, however, some misguided Earnhardt fans saw it as an insult. Within minutes of Gordon’s tribute, internet message boards lit up with howls of indignity from the Earnhardt Army, as writer after writer questioned the motives of the Dupont Chevrolet team.

“Who does he think he is,” wrote one irate online fan. “How dare he compare himself to `Big E?’”

Another compared the two drivers with the words, “76 real wins vs. 76 CHEATER wins.”

The fusilade continued for nearly 30 minutes, until Dale Earnhardt, Jr. unwittingly called off the assault with his own post-race comments. Earnhardt – who climbed from his Budweiser Chevrolet and went straight to Victory Lane Saturday night – thanked Gordon for the gesture, saying, “He's a class act, and I'm happy for him. I saw him with the flag on the big screen. That's cool. They must have had that thing around for a lot of races."

Almost instantly, the tenor of the online conversation changed, as the Earnhardt Army’s lunatic fringe grudgingly holstered its weapons and returned to DEFCON One.

Gordon admitted after the race that he had feared just such a knee-jerk reaction, saying, "When they approached me about it at first, I said `no.’ I didn't want people to take it the wrong way. Some people might think we were saying I was as good as him. Holding that #3 flag (was) by no means saying we're as good as him. We wanted to honor him. We wanted to show tribute and honor.

“We've been holding on to that flag for a long time."

Asked about the possibility of passing Earnhardt next week at Talladega, Gordon cracked a wry smile and said, "I might just carry that flag around for the whole race. (Then) they might not throw things at me." 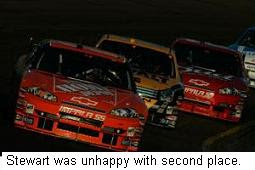 Stewart Angry, Explanation To Follow: Despite a tremendous, late-race battle with Gordon Saturday night, Tony Stewart climbed out of his Home Depot Chevrolet an angry man. The two-time Nextel Cup Series champion refused the customary post-race radio and television interviews, and almost certainly earned himself a fine from NASCAR later this week by declining to appear for the mandatory press conference involving the race’s top three finishers.

Why was Stewart angry? Good question.

Perhaps he was upset about failing to win, after dominating large portions of Saturday night’s race. If so, it’s understandable, though the same could be said for Denny Hamlin and others; all of whom made themselves available for post-race commentary.

Maybe he was upset over the rubbing that occurred between himself and Gordon down the stretch. It’s doubtful, though, since Smoke has emerged from similar late-lap jousts with an ear-to-ear grin and comments about how much fun it is to race on the ragged edge with a driver you respect.

Or maybe his oft-stated loathing for NASCAR’s new Car Of Tomorrow once again reached a boiling point, prompting him to honor the age-old adage that states, “If you can’t say something good, say nothing at all.”

Waltrip Says Daytona-Gate Closer To Resolution: Michael Waltrip met with NASCAR officials at Texas Motor Speedway 10 days ago, and says he now knows more about the mystery substance found in his car’s intake manifold at Daytona International Speedway in February. Waltrip said that information will allow him to proceed with an internal investigation into the controversy.

Waltrip has had little to say on the topic since the NASCAR Nextel Cup Series broke camp and left Daytona Beach nearly to months ago. He and General Manager Ty Norris claim to have conducted an exhaustive internal investigation into the matter, but insist they have been unable to learn anything about how the substance got into Waltrip’s NAPA Auto Parts Toyota, or who put it there. Meanwhile, crewchief David Hyder and Director of Competition Bobby Kennedy remain on indefinite suspension from NASCAR, with my sources saying those suspensions will remain in effect until MWR comes forth with both an explanation, and a culprit.

Following the meeting, Waltrip said he is "looking forward to bringing that whole scenario to a close," prompting widespread speculation in the Nextel Cup garage about who will ultimately take the fall for one of the most blatant instances of cheating in recent NASCAR history.

Another meeting with NASCAR will reportedly take place this weekend at Talladega Superspeedway, where Waltrip will attempt to break a string of seven consecutive DNQs dating back to California Speedway on February 25th.
Posted by Dave Moody at 10:33 AM