Buzz From All-Star Weekend In Charlotte 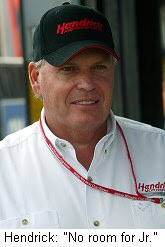 Rick Hendrick said Saturday that there is "there's no room at the inn" for Dale Earnhardt, Jr., at Hendrick Motorsports. That leaves Richard Childress, Joe Gibbs and Bobby Ginn on the list of top-flight, Chevrolet-backed team owners still in the Earnhardt derby. All three have said they are interested in speaking with Earnhardt.

All of Hendrick’s current drivers -- Jeff Gordon, Jimmie Johnson, Kyle Busch and Casey Mears –- are under contract through at least the 2008 season. Hendrick said he would help Earnhardt with chassis and/or engines if he decides to field his own Nextel Cup team, though Earnhardt has said that option is last on his list of possibilities for 2008.

Earnhardt, Childress Team Up (But Not That Way): Richard Childress Raciing and Dale Earnhardt, Inc. announced the formation of Earnhardt-Childress Racing Technologies this weekend; a move that will combine the engine departments of the two teams.

Construction will begin this summer on a facility, to be located between RCR and DEI, with completion expected by the middle of next year. Until then, work will be divided between the two shops. Earnhardt-Childress Racing Technologies will build engines for their Nextel Cup and Busch Series teams, with an engine leasing program for Cup, Busch and Truck teams to follow at some point in the future. The partnership will also expand to the Grand American Rolex Series, off-road racing, and other stock car series in the long term.

MWR Suspensions Lifted: NASCAR announced this weekend that it will lift the indefinite suspensions of Michael Waltrip Racing Competition Director Bobby Kennedy and former crewchief David Hyder on May 30th.

Hyder and Kennedy were suspended after the discovery of an unnamed fuel additive in Waltrip’s Toyota prior to Daytona 500 qualifying, and Hyder was fired by the team last month. Waltrip commented on NASCAR’s announcement, expressing full confidence in Kennedy’s innocence, and saying his Competition Director had been “booted by association" with Hyder.

“Bobby has been with me for seven or eight years, and we've never gotten into any trouble for anything,” said Waltip. “I don't know Hyder, (but) I know Bobby.”

Waltrip met with NASCAR officials last week, and offered a bit of insight into the long-running investigation, saying, "They told us (the additive) was obviously put there on purpose to enhance performance, and that it had to be done by someone inside our company.”

He stopped short of blaming Hyder directly, saying, “I don't want to single out Hyder, (but) I do want to say that a couple of the guys who came with him are no longer employed by us."
Posted by Dave Moody at 11:43 AM