Hendrick/Chevrolet Dominance Does Not Necessitate A NASCAR Rule Change

NASCAR has raced its new “Car Of Tomorrow” four times this season, and Hendrick Motorsports has won `em all 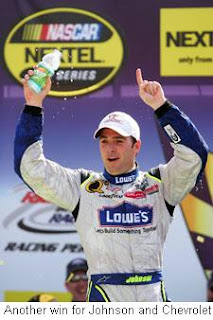 Kyle Busch scored at Bristol, Martinsville fell to Jimmie Johnson, Jeff Gordon won at Phoenix and Johnson doubled-up last weekend at Richmond. Each of those four races featured at least two Hendrick Chevrolets in the top five, if not three. And in three of the four races, Hendrick cars started on the pole.

That type of dominance is rare in NASCAR, and it has not gone unnoticed. The call has gone out from some corners for NASCAR to intercede, leveling the playing field with a rule change designed to slow the Chevrolets. There is precedent for such a move, since NASCAR has tinkered with rear spoiler angles and front valence heights in the past, in an effort to equalize competition among the various makes. Midseason rule changes have been rare in recent seasons, however, and it’s hard to imagine the sanctioning body rewriting its rulebook after just four COT events, in an effort to slow the Hendrick juggernaut.

In fact, there is no reason to do so.

Dale Earnhardt, Jr., called upon NASCAR to revamp the COT this week, saying, “Everyone is struggling with getting the cars to turn. Even when you're running in second or third position, you're just the best of the worst cars out there. Nobody's cars were that fun to drive. You're just trying to be the guy with the least amount of problems.”

With all due respect, Jimmie Johnson and Jeff Gordon looked like they were having all kinds of fun Sunday. Their cars weren’t perfect -- no car ever is -- but they were plenty good enough to claim a 1-2-4 finish for Johnson, Gordon and Kurt Busch.

Sorry, Junior, but the Car Of Tomorrow didn’t beat you Sunday. Hendrick Motorsports beat you, by taking the car you and your team cannot seem to figure out, and making it fly. While you wallowed through the corners with a tight-handling machine, the Hendrick stable found a way to make their cars turn. That’s what separates the men from the boys in this sport, no matter what kind of car is being raced. 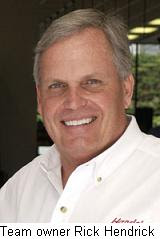 For the record, Hendrick Motorsports has also won three of the six non-COT events this season; for a total of seven checkered flags in 10 starts. Chevrolet has won two of the remaining three with drivers Kevin Harvick and Jeff Burton, while Matt Kenseth’s Ford scored the only non-bowtie victory of the season at California Speedway

Is that dominance grounds for a rule change? Absolutely not.

There is no doubt that Chevrolet has ruled the roost this season. The top three teams in NASCAR Nextel Cup racing – Hendrick, Joe Gibbs Racing and Richard Childress Racing – all field Chevrolets, and Dale Earnhardt, Inc., Haas-CNC and Hall Of Fame Racing have also made significant contributions.

Are those teams dominating because of Chevrolet’s input, or is Chevrolet cleaning house simply because it has the best teams? Most likely, it’s a little bit of both.

Jack Roush readily admits that he allowed his Ford team to fall behind the technological times. Penske Racing South drivers Kurt Busch and Ryan Newman have ackowledged that shortcomings in the way their team collects and implements data hindered their Dodges last season. With the exception of Dave Blaney and David Reutimann, the Toyota camp is in complete disarray, leaving the field wide open for Chevrolet to dominate.

Chevy has done what is necessary to exploit that opportunity.

The bowtie brigade has done its homework across the board, providing its teams with the part, pieces, technology and information necessary to win at NASCAR’s highest level. Those teams have taken that support and made the most of it, assembling a Murderer’s Row of top-shelf cars and drivers. Ford, Dodge and Toyota have exacerbated the situation by dropping the ball, allowing Chevy to lap the field with only token opposition.

Hendrick Motorsports – and Chevrolet in general -- have done what every manufacturer and team set out to do at the start of every season. They have dominated their competition, won the lion’s share of races, and given themselves a seemingly insurmountable lead in the manufacturer’s standings. They should not be punished for doing their jobs better than the competition. In fact, they should be applauded for it.

Ford, Dodge and Toyota, the gauntlet has been laid at your feet. Get to work, identify the flaws in your respective programs and begin making whatever changes are necessary to improve.

But don’t expect NASCAR to do the hard work for you.
Posted by Dave Moody at 10:54 AM