Published reports today say that Dale Earnhardt Jr.’s demand for a 51% stake in Dale Earnhardt Inc. was not as reasonable as many assumed. In fact, it appears that Junior and his siblings; Kerry, Kelley and Taylor, presently have no ownership stake in the company, at all. 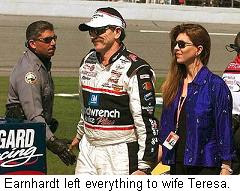 In fact, Dale Earnhardt’s will -- signed in December of 1992 -- awarded 100% of the team to his widow, Teresa Earnhardt. Earnhardt, Sr. owned 100% percent of the stock in DEI, and his will empowered Teresa "to retain and carry on any business or property in which I may own an interest at the time of my death." It also specifically stated that Teresa should receive "all of the stock owned by decedent in Dale Earnhardt Inc."

The debate over ownership and control of DEI is believed to have scuttled negotiations to re-sign Junior to a new contract, leading to the recent announcement that he will leave his father's team at the end of this season to race elsewhere in 2008 and beyond. Where Earnhardt may land continues to be the hottest topic of conversation in NASCAR.

Yesterday, Kelley Earnhardt Elledge insisted that a decision on her brother's plans may not come before mid-summer. 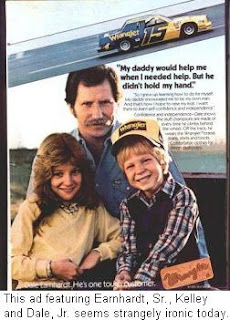 "By mid to late summer, we would definitely have our position solidified," she said. "If we want to make the most out of this change, a date no later than August 1 would be best, due to sponsor point of sale, advertising, licensed products and other things that need time to be developed and produced."

Earnhardt Elledge said she was pleasantly surprised with the number of offers her brother has received from NASCAR Nextel Cup teams, and stressed that nobody is out of the running.

"I have received more calls than expected, but the more options the better," she said. "The process has not reached a point where we have eliminated options. All of our options remain viable until we have 100% decided on one."
Posted by Dave Moody at 12:31 PM