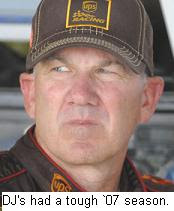 Dale Jarrett said yesterday that last week’s removal of Matt Borland as crewchief of his #44 UPS Toyota was made in an effort to improve the entire, three-car effort at Michael Waltrip Racing, and had nothing to do with the #44 team’s poor on-track performance. Jarrett and General Manager Ty Norris said a number of problems were found with Michael Waltrip Racing's three cars when they arrived at Talladega last week, convincing Norris that a Technical Director was needed to oversee the operation of the teams.

"We need to strengthen our organization in a way that it was going to take Matt away from being the crewchief," said Jarrett in a Friday press conference here at Richmond International Raceway. "We're having some issues with our racecars getting through the race shop and to the track. We needed someone to serve as Technical Director, and that's what Matt was hired for in the beginning."

Borland’s contract with MWR called for him to serve as a crewchief for two seasons, before being promoted to Technical Director. Borland balked a making the move early, eventually prompting a decision that he leave the team entirely. Jason Burdett will assume the crewchief’s role for Jarrett, possibly as soon as next weekend at Darlington.

Jarrett failed to qualify for tonight’s "Crown Royal Presents The Jim Stewart 400," snapping a string of 424 consecutive Netxel Cup starts. The former series champion repeatedly denied that the Borland move was specifically design to improved the performance of his #44 team, and grew visibly angry when asked about his rapid turnover of crewchiefs in recent seasons. 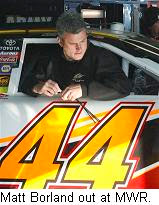 “That’s because you all count everybody that was put in for one race or another,” snapped Jarrett, who has gone through approximately a dozen crewchiefs in the last five seasons. “I didn’t have a thing to do with it sometimes, and to be quite honest, it’s not something I’m concerned with. I don’t really care what the number is. I’m not that hard to get along with, I can assure you. But I am demanding. You’ll work your tail off, because I work my tail off.

"We have to do some things here, and make some moves to make our organization better as a whole," Jarrett said. "This isn't just about the 44 car. It's about the entire Michael Waltrip Racing organization, and trying to strengthen it.”

Jarrett said he knows the “feel” that he wants in a racecar, but has been unable to communicate those preferences to his crewchiefs.

Borland won 12 races with Ryan Newman at Penske Racing South, before being lured away to join the MWR stable and Jarrett in 2007. He is not believed to be in attendance at Richmond this weekend, and spokespersons told Sirius Speedway late last week that he would speak to the media only if he accepts a position with another NASCAR team.
Posted by Dave Moody at 1:09 PM