Last week, in the aftermath of Dale Earnhardt, Jr.’s announcement that he will leave Dale Earnhardt, Inc., at the end of the season, crewchief Tony Eury, Jr., appealed to media members and fans to give his team space in coming weeks, and not make their job more difficult.

Saturday, the team shot itself in the foot, after illegally modified rear-wing brackets were found on Earnhardt’s Budweiser Chevrolet. NASCAR responded yesterday by docking both Earnhardt and team-owner Teresa Earnhardt 100 championship points, fining the team $100,000 (equal to Michael Waltrip’s record penalty at Daytona) and suspending Eury for six races, including this weekend’s NASCAR Nextel All-Star Challenge.

NASCAR Nextel Cup Series Director John Darby told Sirius Speedway yesterday that while wing brackets were not specifically included on the list of items NASCAR has warned teams not to tamper with, the sanctioning body felt that a clear message needed to be sent that it will not tolerate any manipulation of its new Car Of Tomorrow rules package.

The penalty drops Earnhardt from 12th to 14th in championship points; outside the parameters for qualification for the Chase For The Nextel Cup. 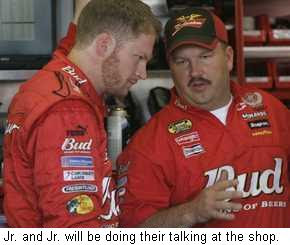 DEI released a statement late yesterday vowing to appeal the severity of the penalty, saying, “The car in question was a brand new car, and the brackets that were found to be nonconforming were built as test pieces before the final design was established by NASCAR. They should not have been on the car, and with Tony Eury Jr. away from the track Thursday during inspection, the error was not caught.

"We do not question the infraction, which is clearly spelled out in the NASCAR rule book. However, we have appealed the severity of the penalty."

It is not likely that the NASCAR Stock Car Racing Commission will rule in favor of DEI, since NASCAR warned its teams in advance what the penalty would be for violating the COT rules. In addition, there is no precedent for the “we put them on by mistake” defense in NASCAR Nextel Cup racing.

BDR Will Not Appeal Benson Penalty: Bill Davis Racing will not appeal the penalties assessed in the aftermath of last week’s bizarre incident during NASCAR Craftsman Truck Series testing at Lowe's Motor Speedway. Driver Johnny Benson and team-owner Gail Davis were each docked 50 championship points, and crewchief Trip Bruce was fined $10,000 and suspended for two weeks after an unauthorized driver crashed Benson’s truck at the test. 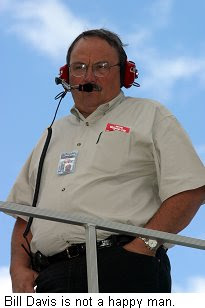 Mike Lichty -- a friend and mentor of Benson's – was allowed to drive the truck last Thursday, despite having no NASCAR license or insurance. NASCAR immediately ejected Benson and his team from the test, before announcing the penalties yesterday. Team owner Bill Davis reacted angrily to the incident, saying, "I didn’t know anything about it. I didn’t even know his name. I had no earthly idea that he was driving the truck. That’s about against the rules as anything I’ve seen happen."

Yesterday, Davis said, "We agree with the penalties NASCAR has issued to the 23 team, and we will deal with them accordingly. NASCAR has rules and policies in place to keep the drivers and crewmembers safe, and we appreciate their vigilance in this instance."

The penalty drops Benson from seventh to eighth in points, 252 behind teammate Mike Skinner. Billy Hagerthey will replace Bruce during his suspension.

The penalties come on the heels of what was already a tough month for Davis. Two weeks ago, former driver Scott Wimmer filed a lawsuit against Davis, asking for $1.2 million in unpaid salary for the 2006 season and alleging that he was improperly released at the end of the 2005 season.
Posted by Dave Moody at 11:25 AM