COMMENTARY: Would Everyone Please Just Shut The Hell Up?

William Shakespeare had it right when he said, “The first thing we do, let's kill all the lawyers.” 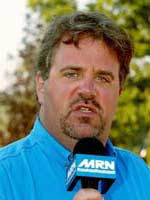 Landmark Newspapers reporter Dustin Long wrote a fascinating article Wednesday, bringing to light documents filed by both sides in the NASCAR v. Mayfield suit, including e-mail transcripts between the attorneys for both sides that do little to enhance the reputation of the legal profession.

In an e-mail to Mayfield’s attorney, NASCAR attorney Helen Maher outlined the fundamental difference between the two sides in recent weeks; the inability to agree on a lab to test Mayfield’s B Sample.

"Thank you for agreeing to participate in a call with the judge,” she wrote. “We need you to select a lab that is capable of testing for methamphetamine, amphetamine and pseudoephedrine.”

Amphetamine is a byproduct of Adderall, while pseudoephedrine is the active ingredient in Claritin-D. Mayfield claims that test results have been falsely skewed by his use of prescription Adderall to treat a diagnosed case of ADHD, and Claritin-D for allergies.

Buric responded sarcastically, writing, "Blah blah blah. I did not say I would refuse to participate, I told you it was stupid to make the call. If you call the judge, patch me in. For the tenth time, we already selected the lab. Now for the eleventh time, all together now, "LAB CORP. is our lab of choice."

Maher restated NASCAR’s contention that LabCorp is incapable of performing the necessary tests, writing, ”As we have consistently told you, the selection of the independent lab is contingent on the lab's ability to test for the drugs at issue in this case. We attempted to contact LabCorp. on Friday to determine whether it was capable of conducting such testing. Despite our being on hold for nearly two hours, we were unable to reach a live operator.”

Buric replied, “It would be nice for you to be completely candid about what I say. It would also be nice to get an email from you that is not riddled with self-serving commentary. I told you many times, I don't care what you think.”

With that kind of legal counsel advising him, it's no surprise that Mayfield’s recent remarks have been straight out of The Jerry Springer Show. Sadly, there is no sign that things will improve anytime soon. U.S. District Judge Graham Mullen set the Mayfield v. NASCAR case for jury trial beginning on September 13, 2010, leaving 14 long months for the rhetoric to continue. In addition, Lisa Mayfield filed a defamation lawsuit against her stepson Wednesday, seeking compensatory damages in excess of $10,000 and punitive damages in excess of $10,000.

The suit results from comments made after Lisa Mayfield testified that she witnessed her stepson taking methamphetamine approximately 30 times between 1998 and 2005, that she witnessed him manufacturing the drug himself until the ingredients became too difficult to obtain, and that he used meth just days before an event at Darlington Raceway nearly a decade ago.

Jeremy Mayfield has alleged that NASCAR paid Lisa Mayfield for her testimonony, calling her “a whore… (and) a gold-digger” and accusng her of playing a role in his father's death. Lisa Mayfield claims that she "suffered damage to her reputation as the result of the Defendant's defamatory statements ... and has undergone great mental suffering and emotional distress as a result of the Defendant's action in defaming her."

The suffering of NASCAR Nation increases exponentially with every word uttered by anyone associated with this case.