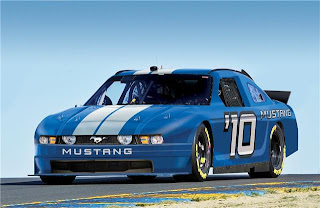 Ford Motor Company announced today that it will field the Ford Mustang in the NASCAR Nationwide Series, beginning with a limited rollout of the series’ new car in 2010. The Mustang is a legendary make in drag racing, road racing and drifting, but it has never competed in any modern-era NASCAR-sanctioned series.

Brian Wolfe, Director of Ford North America Motorsports, made the announcement today, saying, “We're excited about Mustang coming to NASCAR. It's the most successful product nameplate in racing history, and it seems only right that it should be coming to the most popular form of racing in North America. We had been talking with NASCAR for some time about Mustang as part of its vision for a 'muscle car' rollout for the Nationwide Series. We both saw it as a way of differentiating the series from Sprint Cup. We loved the idea, so we jumped on the chance to extend Mustang's racing legacy to a new series reaching a huge and loyal audience.”

Ford Racing Communications Manager Kevin Kennedy told Sirius Speedway Tuesday that the new NASCAR Mustang will be more stock-appearing than the Sprint Cup Ford Fusion, adding that the appearance of the car was at the top of FoMoCo’s wish list. While declining to comment on the direction Chevrolet, Dodge and Toyota might take with their versions of the new Nationwide car, Kennedy confirmed that NASCAR would like to make the series a pony-car/musclecar-based platform.

Ford Racing has already completed the official NASCAR submission and approval process for the new car, and production of Mustang parts will begin once templates are finalized. Teams are expected to begin building cars for testing later this fall.
Posted by Dave Moody at 4:22 PM