Mayfield Failed Second Test; Adderall/Claritin Mix Ruled Out As Cause

NASCAR filed documents in District Court this week asking the judge to vacate his July 1 order allowing Mayfield back behind the wheel of a NASCAR Sprint Cup Series racecar. 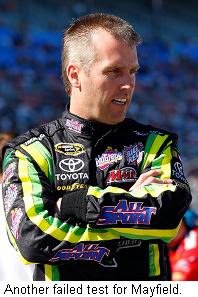 The filing included a large amount of new evidence, including documents claiming that Mayfield once again tested positive for methamphetamines in a screening conducted last week. NASCAR’s attorneys claim that additional tests were performed on Mayfield’s latest urine sample; tests which rule out the possibility of an Adderall/Claritin D mixture being mistaken for methamphetamine. They also claim that Mayfield’s latest sample was “very dilute,” alleging an excessive consumption of water by Mayfield in an deliberate attempt to defeat the test.

The filing contends that the levels of methamphetamine in Mayfield’s sample are consistent with those seen in habitual users who consume high doses of methamphetamine, develop a tolerance for the drug and therefore do not display outward signs of drug use.

On last night’s “Late Shift” on Sirius NASCAR Radio, Mayfield responded to the news of his second failed drug test, telling co-hosts Nate Ryan and Buddy Baker that he was expecting the positive test result. "I didn't think they were going to come back and say I was clean," he said. "That's just not (the) way they want to work anymore.”

Mayfield accused NASCAR of being unwilling to consider the possibility of his innocence, saying, “they have a hard time admitting when they're wrong or done something wrong. We all know that, whether we admit it or not. It's just part of the battle, part of the things we're going to have to fight."

Mayfield repeated his previous assertion that he has been targeted by NASCAR as a driver who would “go away for 30 days or whatever and come back… and drive again. I was a good example for their policy.”

He claimed to have undergone two non-NASCAR mandated drug screenings at facilities of his choice on the same day as NASCAR’s most recent test. Asked whether those tests had been negative for methamphetamine, he said, “I promise you they'll show different results than what they (NASCAR) show." He claimed to have had “up to 15 or 16 different tests that show clean. The only two that show positive are the ones that come from (Dr.) David Black down at his lab.”

Mayfield reacted angrily to those allegations, saying, “I'm not even going to call that lady my stepmom. That was a lady who was married to my dad who is very, very angry at me. A lady who pretty much shot and killed my dad. In the next few days, you'll be hearing more about that. She's a very evil lady (who) obviously can be bought, and her time's coming. (She) doesn't like me whatsoever, and doesn't deserve to even have the Mayfield last name.” 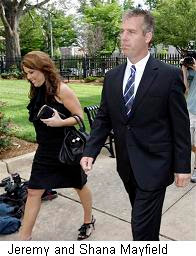 Despite two interviews with national media in the last week, Mayfield claimed, “I haven't said anything for awhile. I've been real quiet, letting (NASCAR) do their own deal. Let Ramsey (Poston) run his mouth on a daily basis. I'm not going to lay down. I'm going to stand up for what's right. That's the way I am, and who I am. They can try and throw every little tactical thing they can throw at me, but I can promise you I'm not going down.”

Mayfield said he is no longer focused on resurrecting his NASCAR career, saying, “It's not going to work out for me. I can't afford to… pay employees and pay people to work on racecars when we don't have the money to do that. We're putting all of our resources… into fighting this to the end. And that's what we intend to do.”
Posted by Dave Moody at 10:28 AM