Harvick To Stewart Haas? There's More To The Story

Sports Illustrated is reporting today that Kevin Harvick has asked Richard Childress to release him from his contract one year early, at the end of this season. 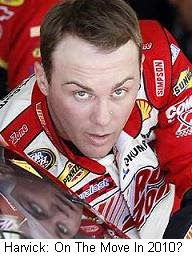 SI cites multiple sources saying that Harvick hopes to jump to Stewart-Haas Racing next season, where Tony Stewart has said his team would field a third Sprint Cup entry, if sponsorship is available. The report claimed that Harvick will take his sponsor with him to Stewart-Haas Racing, when Shell-Pennzoil’s deal with RCR expires at the end of the season. RCR spokesman David Hart disputed that claim, however, telling Sirius Speedway via e-mail that Shell’s contract with RCR extends through the 2010 campaign.

Our sources say that while Harvick is indeed talking with both Stewart-Haas and Childress about changing teams next season, Shell-Pennzoil is not a part of the equation. If Harvick changes teams next season, it will likely be with the backing of Jack Daniel's, which currently backs RCR driver Casey Mears.

Hart said that RCR is “currently in negotiations with Jack Daniel’s to extend its current contract” beyond the 2009 season.

Mayfield Has A Backer: Jeremy Mayfield has a sponsor for next weekend’s Allstate 400 at the Brickyard.

SmallSponsor.com owner Robert Craddock said late last week that he believes Mayfield is innocent of the substance abuse charges leveled against him by NASCAR, and is negotiating with a Fortune 500-level company to join him in sponsoring the Mayfield Motorsports #41 Toyota.

If necessary, Craddock said he has the means to back Mayfield himself.

SmallSponsor.com backed Mayfield prior to his suspensionm and was also on the car during J.J. Yeley’s one-race tenure as driver. Mayfield Motorsports team manager Bobby Wooten said of the deal, “We’re waiting for Robert to get everything put together. If he can bring to the table what he says he can, we’ll be more than glad to get out there with him.”
Posted by Dave Moody at 12:58 PM