Just when you think things can't get any more bizarre, the Jeremy Mayfield saga takes another turn toward the absurd.

NASCAR spokesmen said today that Mayfield submitted to a drug test Monday, but only after delaying that test for seven hours. NASCAR's Ramsey Poston accused Mayfield of intentionally attempting to avoid the test, but Mayfield’s attorney, John Buric, said the delay resulted from confusion over the location of the testing laboratory.

Poston said Mayfield was contacted at 1:18 p.m. Monday and told to report to a specific laboratory to provide a sample; procedures outlined in NASCAR’s drug testing policy.

That call triggered a veritable Keystone Kops series of events that strains the bounds of believability, no matter whose version you prefer. 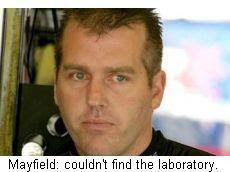 Attorney Buric said NASCAR’s initial phone call went to Mayfield’s voice mail and was not received for more than an hour. Unable to reach NASCAR’s approved laboratory within the specified two-hour time frame, Buric says Mayfield was told to report to a closer lab, but was unable to find it. After being unable to contact personnel at the second lab to get directions, Buric says he directed his client to go to his own laboratory to provide a urine sample.

NASCAR subsequently sent lab technicians and a security official to Mayfield’s home, and were able to obtain their own sample after an additional one-hour delay; at approximately 8:20 p.m.

Buric blamed the additional delay on NASCAR’s insistence that Mayfield be observed while providing the sample to ensure it was his; a requirement Buric called, “outrageous and…intentional.” He accused the sanctioning body of “mak(ing) the rules up as (they) go along” and of intentionally harassing his client.

NASCAR’s Poston called it, “an attempt to delay and avoid doing a test within the prescribed time,” saying the sample was obtained only after “an extraordinary amount of delay and avoidance on (Mayfield’s) part.”

Finally, Buric confirmed that Mayfield will not attempt to qualify for Saturday night’s race at Chicagoland Speedway, saying his client lacks sponsorship for his own #41 Toyota, and has been unable to find a ride with another team. He accused NASCAR, sponsors and teams of treating Mayfield “like a pariah.”