Danny Bohn To Drive For Godfather Motorsports at Motor Mile

Denver, NC – Godfather Motorsports returns to the track in the PASS 150 on Saturday, May 28 at Motor Mile Speedway in Radford, VA, with third-generation driver Danny Bohn at the wheel. 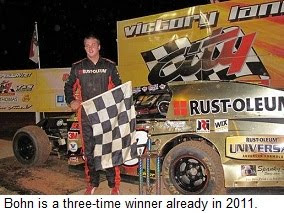 Danny Bohn has continued the family’s hard driving tradition since beginning his racing career in the Bandolero division in 2003 at Wall Stadium. He won the track championship in only his second year of competition, before graduating to the Limited Modified ranks and winning the championship in both 2006 and 2007. He split time between dirt and asphalt racing beginning in 2009, and was a main event and pole winner on the ASA asphalt Modified Tour in addition to being voted that circuit’s “Most Popular Driver.” On dirt, he won the Modified Track championship at North Carolina’s East Lincoln Speedway and carried the checkered flag in the prestigious “WIX Dirt Modified Border Battle” at Champion (NC) Speedway. He defended his “Border Battle” championship a year ago, and racked up multiple feature wins at Carolina, Champion and East Windsor Speedways. He has already visited Victory Lane at three different tracks in 2011, winning at Carolina, East Lincoln and I-77, and is campaigning an asphalt modified in a limited schedule of events at the legendary Bowman Gray Stadium. 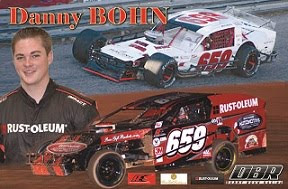 Bohn will make his first career Super Late Model start at Motor Mile, and said he is looking forward to racing for Godfather Motorsports. “When Dave Moody and Jim Gallison offered to put me in their car, I jumped at the chance,” he said. “Super Late Models are the next step for me, and I can’t wait to get started. One of GFM’s major sponsors, Bea’s Gift Baskets.com, is also a major supporter of my dirt modified program, and I couldn’t be happier to have them along for the ride.”

“Danny Bohn is an incredibly talented young driver who is building an impressive resume on both dirt and asphalt,” said Godfather Motorsports co-owner Dave Moody. “We tested with him earlier this season, and he adapted almost instantly to a car and a track that he had never seen before. We knew right away that we wanted to give him an opportunity.”