Martin Truex, Jr. laid it on the line Saturday night at Richmond International Raceway, unleashing an emotional outburst that could result in some new faces on his NAPA Toyota team Saturday night at Darlington. 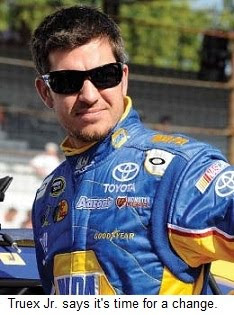 Just weeks after a stuck throttle triggered a vicious crash at Martinsville Speedway, Truex exploded at his pit crew after a pair of pit road gaffes cost him the lead in the Crown Royal Presents the Matthew and Daniel Hansen 400. “You’re all f---ing fired,” barked the normally soft spoken driver. “Every f---ing one of you!”

“I couldn’t believe it was happening again,” said Truex today. “It seems like when the race is on the line and the pressure is on, we always seem to give it away. Everyone loses their cool from time to time, and Saturday night, I certainly did. It’s frustrating, but hopefully now we can get these issues fixed and move on.”

Truex said Saturday night’s uncharacteristic outburst stemmed from his need to vent after weeks of frustration. “It’s hard to be out there in the race car and say nothing (when things go wrong),” he explained. “You can’t help pushing the button and telling everyone how you feel. I went from screaming, “Hell yeah” when we took the lead to absolute rage when we had a loose wheel, pitted to fix it, then left a lug nut off and had to pit again.

“We put so much into this,” he said. “We put our entire lives into what we do. The Sprint Cup Series is the toughest, most difficult series in the world, and there’s a lot of pressure on everybody to perform. If you’re not doing your job, someone else will come do it for you. I want to win more than anything in the world, and that’s why I got upset. If people don’t like (me) yelling on the radio, they need to turn the radio off.”

Truex stood by his call for changes in his Michael Waltrip Racing over-the-wall crew, saying, “it’s been an ongoing thing with us. Since the midpoint of last year, we’ve had problems with loose wheels. I reached the end of my rope the other night, and it’s time to address it. I’m sure there will be some changes (before) next Saturday night. I don’t know exactly what they have planned, but after 12 or 13 loose wheels in the last 20 races, it’s time to make a change.”

Truex said he was excused from MWR’s weekly competition meeting in order to travel to Indianapolis Motor Speedway for tomorrow’s opening day of a Goodyear tire test, adding, “It’s probably better that I wasn’t around, because it wouldn’t have been pretty.

“The last few years have been tough -- not getting the results we expect or deserve -- and this season has been the same way,” he said. “We’ve had great race cars and run really well, but we have absolutely nothing to show for it. It’s frustrating to continually go through this, week in and week out. Sooner or later you get tired of it and have to do something different.

“I’ll let the higher-ups make the decisions and push the buttons,” he said. “Hopefully, they’ll do the right thing so we don’t have to worry about it anymore.”
Posted by Dave Moody at 9:13 PM