Saturday night’s post-race skirmish between Kevin Harvick and Kyle Busch has renewed the age-old debate over whether NASCAR is sport, a show or a combination of the two. 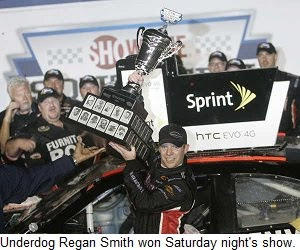 Professional sports are at least part entertainment, and always have been. In order to survive, a particular sport must be exciting enough to draw and hold a crowd, both in person and on television or radio. In the 1970s, the popularity of Chris Evert, Jimmy Connors, Martina Navratilova and John McEnroe spawned a new sporting concept; World Team Tennis. The league featured top-notch athleticism and all the big names, but try as it might, the WTT wasn’t much of a show. League officials attempted to cast off tennis' stodgy image by blaring rock music between points and allowing players to wear something other than basic white onto the court. Even with those concessions, though, nobody bought a ticket.

NASCAR has always understood and embraced the importance of showmanship. That does not mean, however, that NASCAR is all “show” and no “go.” There is no question that fans witnessed a race at Darlington Raceway Saturday night; and a darned good one, at that. A green/white/checkered flag finish pitting championship contender Carl Edwards against underdog Regan Smith had the fans on their feet, and would have stood quite well on its own without the subsequent post-race festivities involving Harvick and Busch. The water cooler talk this week is almost equally divided between the finis” and the fight; the latter being a wildly overstated characterization of a conflict that saw neither Harvick nor Busch throw anything resembling a punch. "Race" and "show" are co-existing quite nicely this week, leaving no real reason for anyone to question whether NASCAR is truly a sport.

The answer is a resounding "YES," and it always has been.

NASCAR drivers are passionate about what they do, and that’s a good thing, even when incidents like Saturday night’s Harvick/Busch dustup lend themselves to the wildest forms of exaggeration. Nobody climbed out of their car and instigated a donnybrook that carried across pit road and through the Darlington grandstand, splattering young children with gore and traumatizing innocent bystanders. No one got hurt, no lives were lost and in the end, it’s difficult to say that any damage was done. NASCAR has weighed-in to make sure it doesn't happen again, and as the sanctioning body’s Senior Director for Communications, Kerry Tharp, said today, both Busch and Harvick know precisely what is expected of them going forward. It likely won’t happen again, and NASCAR fans have no reason to complain that their heroes are too bland, too politically correct, too vanilla.

When the Allison brothers threw down with Cale Yarborough after crashing out of the 1979 Daytona 500, the world as we know it did not end. NASCAR was not irreparably harmed. In fact, the sport almost certainly benefitted from the conflict. Saturday night’s Darlington dust-up won’t kill us, either. It might even do us some good.

NASCAR is far from perfect, but it could be much worse. The 2011 season is not being threatened by work stoppages or lock-outs, as millionaire athletes battle billionaire team owners for a larger share of an already obscenely large pie. Our athletes are not being subpoenaed to testify before a congressional subcommittee about their abuse of performance enhancing drugs. No one's been pulled over with a bale of marijuana in the trunk of their car, and nobody's going to jail for shooting themselves with their own unregistered handgun in a seedy strip club on the outskirts of town.

On the list of problems NASCAR could have, we could do much worse than “too much showmanship.”
Posted by Dave Moody at 8:37 PM