NASCAR Lets Montoya, Newman Have At It

Everyone’s got an opinion about Saturday night’s on-track clash between Ryan Newman and Juan Pablo Montoya. NASCAR, however, is staying out of it.

Montoya and Newman have been on-track rivals since 2006, when they tangled during Montoya’s Sprint Cup Series debut at Homestead-Miami Speedway. Contact from behind sent Montoya spinning into the outside wall that day, leaving his Ganassi Racing entry ablaze on the track apron and triggering harsh words from the former F1 star. The pair renewed acquaintance again Saturday night, when Newman “hooked” the right-rear corner of Montoya’s Chevrolet on lap 107 after Montoya appeared to drift into his lane at the exit of Turn Two. Montoya damaged his rear spoiler after clipping the wall, and ran in the second half of the field until exacting a measure of revenge some 130 laps later by spinning Newman in Turn Four. 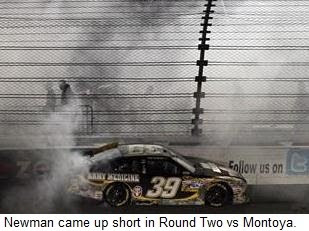 Were the incidents mere racing accidents, intentional takeouts, or a little of each? It depends on who you ask. Both drivers are among the hardest chargers in NASCAR, known for racing on the ragged edge and making their fellow drivers earn every position they get. Eventual second-place finisher Denny Hamlin said afterward that Montoya, in particular, is not a man to trifle with in the heat of battle.

“Every time Montoya has damage, (the person) who did it usually ends up getting wrecked,” said Hamlin. “I like him, I think he's a hell of a driver. But you can't wreck everyone every time you get in an accident. Accidents happen. Guys make mistakes.”

Montoya and Newman drivers did not speak following the race, despite the fact that their transporters were parked just a few feet apart in the Sprint Cup garage. Montoya cold-shouldered interviewers from both NASCAR On FOX and MRN Radio before beating a hasty retreat from the speedway, while Newman walked directly to the NASCAR transporter “to see how this situation is going to be handled.

“He ran up on me off of (Turn) Two and I clipped him,” said Newman afterward. “I'm not going to dump myself into the wall. But to retaliate the way he did just didn't show much class."

NASCAR declined to sanction either man, in keeping with the “Boys Have At It” edict that has governed the sport since the beginning of last season. And while some believe that more stringent penalties should have been levied, NASCAR seems committed to the hands-off policy that has served it well for the last 115 months. The sanctioning body did what was necessary to defuse the situation Saturday night, warning both drivers that a third clash would result in punitive action. Now, they’ll leave it to Newman and Montoya to settle their differences like the grown men they are.

In the early weeks of the “Boys Have At It” era, there was concern that NASCAR’s new policy might reduce the sport to a 190-mile per hour Demolition Derby. After Carl Edwards’ brutal payback of Brad Keselowski at Atlanta Motor Speedway in March of 2010, fans feared that Sprint Cup drivers would suddenly feel empowered to begin enacting vigilante justice for every perceived slight; both real and imagined.

There has been no real evidence to justify those fears, however. Drivers have generally settled their personal grievances with a minimum of bent sheet metal, allowing NASCAR to remain above the fray. Saturday’s Montoya/Newman flap – while good for a few spicy headlines and sound bites – was noteworthy only as an example of the kind of thing that happens in a NASCAR short track race.
Posted by Dave Moody at 1:51 PM