Sirius NASCAR Radio’s Sirius Speedway with Dave Moody has learned that the Vision Aviation Racing NASCAR Camping World Truck Series team has laid off virtually all of its employees, and has no plans to field trucks for at least the next 90 days.

The team has fielded one -- and sometimes two -- trucks this season after forging what was termed a “merger” with Billy Ballew Motorsports in late December, with Ballew retaining an ownership stake in the team. While Vision Aviation took possession of BBM’s truck inventory, transporters and some equipment, sources say Ballew has had little or no hands-on involvement with the team in recent weeks.

Drivers Dusty Davis and Justin Johnson have been the primary drivers for the team this season, but Michael Waltrip won the season opener at Daytona in the team’s #15 Toyota, with Aric Almirola driving the #51 when neither Davis nor Johnson were able to obtain NASCAR approval to race on the 2.5-mile superspeedway.

Officially, the #51 is entered at Dover International Speedway this weekend, with Chris Fontaine as driver and Ballew listed as the owner of record. That move is little more than an owner-points formality, however, since the truck is actually a Chevrolet out of the Glenden Racing Enterprises stable. Glenden normally fields the #84 Chevrolet for Fontaine. 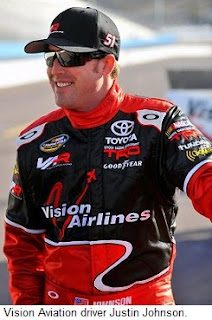 VAR management reportedly told employees earlier this week that the team was shutting down temporarily, with hopes to resume operation in about 90 days. Sources speaking on the condition of anonymity said the team has released all but four people in what was termed “an across the board reorganization” and that plans are underway to restructure the team financially. VAR has reportedly spent approximately $2.5 million already this season, with a payroll approximately triple that of the former Billy Ballew Motorsports.

Ballew had little to say about the situation when contacted today, other than to stress, “I have been paid 100 percent of what is owed to date. The owners of Vision Aviation Racing have met every obligation they have to me, in full.” He declined to comment on the team’s future plans, saying he has not yet spoken with owners Bill and Steve Acor.

Attempts to contact the Acor brothers were unsuccessful.
Posted by Dave Moody at 12:51 PM