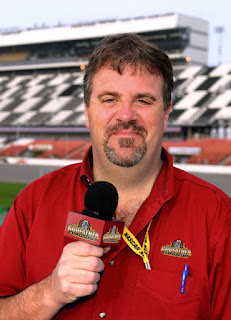 If driver feedback counts for anything – and it does – Sunday night’s Bojangles Southern 500 at Darlington Raceway offered a clear look ahead at NASCAR’s aerodynamic future.


A new, low-downforce aerodynamic package – with an accompanying softer tire -- received rave reviews for the second time in as many outings, with competitive racing, multiple lead changes and an exciting, multi-car battle that had fans on their feet throughout the final 50 laps. As in the package’s first outing at Kentucky Speedway in July, drivers had their hands full at times, wrestling their cars through Darlington’s challenging turns while teetering on the edge of control. And perhaps surprisingly, they emerged from their Darlington-striped mounts raving about the experience.


“This is as good as it gets,” said winner Carl Edwards, a longtime proponent of the low-drag package. “This is what it’s about. We’re sliding cars (and) tires are falling off.


Jamie McMurray echoed those thoughts after finishing 14th, saying he experienced less of the dreaded “aero push” than in past events. 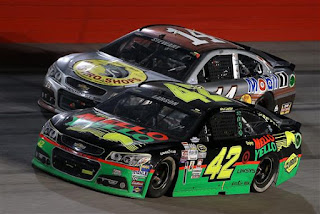 “When you were behind someone, it wasn’t as noticeable as what we had (before),” he said. “They race better when you are behind someone (and) you are not as dependent on having air on the car. I am a big fan of this package. We had a little bit more front downforce with some pans that they allowed us to have, (and) I think that was better. At Kentucky, everybody struggled with getting the front to turn. Here, that didn’t seem to be as big of an issue.
“The leader always has a little bit of an advantage,” he said, “but it seems like he has less of an advantage with the smaller spoiler and this rules package.”
Sixth-place finisher Kurt Busch was also complimentary. While admitting that there is still an advantage to racing in clean air, he called NASCAR’s low-drag package “a nice balance of slip-sliding around and being on the edge.” 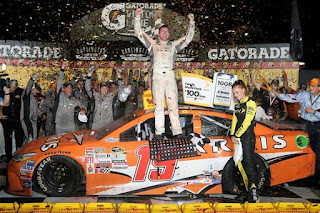 Darlington is admittedly a track like no other. Its unique layout and abrasive surface maximize tire fall-off, tilting the ratio of “man versus machine” decidedly in favor of “man.” There was a common denominator among the Top-5 finishers Sunday night; Edwards, Brad Keselowski, Denny Hamlin, Joey Logano and Kevin Harvick. They’re all wheelmen; ready, willing and able to get “up on the wheel” and manhandle an ill-handling race car to the front of the pack, by whatever means necessary.


NASCAR gave them an opportunity to do exactly that Sunday night, and Goodyear contributed a softer tire that fell-off dramatically in just a few short laps. The end result was some of the best racing we’ve seen this season, and a happy garage area at evening’s end.


Edwards prodded NASCAR to stick with its new rules package for the remainder of the season, saying, “If there’s any chance we can run this in the Chase, I hope we can do it.”
It is unlikely that NASCAR will grant Edwards’ wish at this late date, but multiple sources say that after Sunday’s race, the sanctioning body will almost certainly mandate the low-drag aerodynamic package in a majority of its non-restrictor plate races next season.
McMurray lobbied hard for that change Sunday, saying, “The general consensus among all of the drivers is that we would like to start with this and possibly try to even get more downforce off the cars.”
NASCAR executive vice president and chief racing development officer Steve O'Donnell admitted Sunday night that the sanctioning body was pleased with the outing, but will “spend the proper time with the industry -- the race teams and drivers – before making a final decision on how to proceed.