The Indy Racing League IndyCar season takes the green flag this weekend with the "Toyota Indy 300" at Homestead-Miami Speedway. And yet, the biggest story of the week is not what's happening at the track, but what's going on behind the scenes. 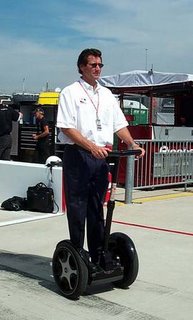 IRL owner Tony George broke his long silence Friday, acknowledging the cat that Champ Car World Series co-owner Kevin Kalhoven let out of the bag weeks ago; that they are negotiating to reunite the rival sanctioning bodies. George, who talks to the media as often (and as willingly) as Paris Hilton wears turtlenecks, confirmed that he and Kalkhoven have been talking about reunification for two or three months now, and that if all goes well, it could happen within the next 12-18 months.

The Indianapolis Motor Speedway owner gave no details on exactly what is being discussed, but it is clear from his remarks that both he and Kalkhoven realize the current state of Open Wheel racing cannot continue for much longer. That's good news for any Open Wheel fan, regardless of whether you prefer Champ Car or IRL.

It doesn't take a genius to figure out that two good racing series could combine to form one tremendous circuit. Imagine Sebastien Bourdais and Dan Wheldon running wheel-to-wheel with a lap to go, followed closely by Sam Hornish, Jr., Paul Tracy, Dario Franchitti, Danica Patrick and Katharine Legge (to name just a few), and you've got a scenario that would put paying customers back in the IRL/Champ Car grandstands again. It would fill the field at the Indianapolis 500 with at least two-dozen bonafide contenders, rather than 10 potential winners and a patched-together field of also-rans and phantoms. Best of all, it would make Open Wheel racing matter again, for the first time in decades.

In the early 1970s, CART stood head-and shoulders above NASCAR in terms of interest and prestige. The Indianapolis 500 was the only race of real national consequence, and when you asked a non-racer to describe what a racecar looked like, he or she almost always described an Indy Car. That has all changed. CART is long gone, victim of shoddy management and collossal ego. In its place stand Champ Car and the Indy Racing League; two circuits jam-packed with people seeemingly incapable of seeing their own faults, but all too willing to bash the shortcomings of the opposition. IRL and CART have spent years fiddling while their respective Romes burned, while NASCAR hustled its way to the top of the American motorsports ladder.

Putting Humpty Dumpty together again will not be easy. There are major differences between the two series; differences in engines, chassis, tires, series sponsors and TV broadcast packages, just to name a few of the major stumbling points. But the fundamental differences in philosophy seem to be falling by the wayside, at long last. George and Kalkhoven both have sufficient personal wealth to play "my way or the highway" for the rest of their lives, so long as they don't mind taking Open Wheel racing to the graveyard with them. Now, it seems they have finally seen the error of their ways, and begun the process of saving the sport.