These Girls Have Got It Going On!

For the first time in the long and storied history of drag racing, three female racers advanced to the final round in their respective pro categories Sunday, at the 37th Annual NHRA Gatornationals at Gainesville (FL) Raceway. In the end, only Angelle Sampey was able to bring home the Wally, topping red-lighting U.S. Army teammate Antron Brown in the Pro Stock Motorcycle final. But with Melanie Troxel making the Top Fuel finals for her third consecutive race, and Erica Enders storming to the final round in Pro Stock, it was a great day to be a girl. 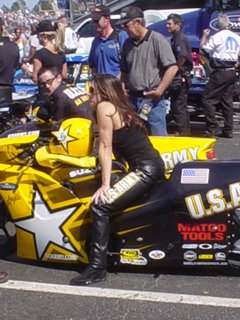 Angelle's 38th career victory provided a little more daylight between her and the rest of the world in the battle for "Winningest Female Racer of All Time." She now has an incredible raceday record of 303-98; good for a 76% win ratio. She is tied for #9 on the NHRA All-Time Wins list with Larry Dixon, and is within seven victories of displacing the legendary Dave Schultz as the winningest rider in NHRA Pro Stock Motorcycle history.

All that, plus ripped abs, major pythons and a cute little belly ring; the girl has got it going ON!

Troxel's bid for her second Top Fuel win in three starts went up in smoke at the 100-foot mark, allowing "Aussie Dave" Grubnic to limp home in 4.943 seconds at 317.90 mph. Grubbie's win came on the same weekend that Strivectin/SD team spokesperson Shirley Muldowney was inducted into the International Drag Racing Hall of Fame; a fitting end for the "Leading Lady" of drag racing. Despite her loss to Grubnic, Troxel still holds the Top Fuel point lead by 73 over "Hot Rod" Fuller.

Enders, meanwhile, continues to be one of the biggest stories of the NHRA PowerAde season to date. Her "Slammers Ultimate Milk" Chevy Cobalt was only slightly above-average Sunday, but she cut a series of killer lights to take holeshot wins over Jason Line and "Tricky Ricky" Smith en route to the finals. A massive case of tire shake doomed her in the money round, but she is up to third in the NHRA PowerAde Championship chase, 89 points behind three-time and defending series champion Greg Anderson, and just 75 back of Warren Johnson. Is there any doubt that Enders will become the first woman to win a Pro Stock race within the next few weeks?