It's All In the Name

As part of a recent project, I found myself researching a number of NASCAR drivers’ career records. There are a number of websites devoted to old-time NASCAR racing, and the information was not particularly hard to find. What I did not expect, however, was a lesson on how colorful this sport’s athletes used to be; right down to their names.

No doubt, stock car racers had more colorful names in the 1950s and `60s. Scrolling through the archives, I found names like Jug Pierce and Judge Rider, FiFi Scott and Gober Sosebee, Nero Steptoe and Fred Steinbroner. The starting lineup in those days had real color, and any field that included Melvin “Puddin’” Swisher, Hilly Rife, Smoky Purser and Volney Schulze would probably have had me in the grandstands, too. Buren Skeen and Van Van Wey (no kidding) would have sold a few tickets on name value alone. 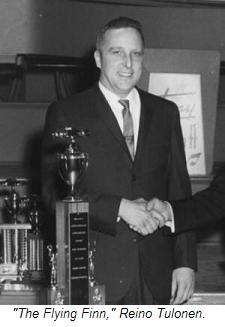 I like to imagine that a driver’s name gives clues to his on-track demeanor. In modern days, the Busch Brothers come to mind. And if you were racing at Charlotte Motor Speedway in 1951, I’m guessing you might have wanted to watch out for Guy Waller.

The archives also included some great candidates for two-driver teams, including the would-be tandem of Dick Passwater (20 Grand National starts in 1952 and `53) and Junior Pooler (one GN start in 1951). Passwater and Pooler; somehow, they just seem to go together. The team of Peckham and Prickett -- Peck Peckham and Chuck Prickett -- also seems natural somehow. Peckham made 27 Grand National starts in the early `50s, while Prickett made a solo appearance in 1957. Dink Widenhouse (1954-1956) would have made a great teammate for Legs Whitcomb, and if you can’t figure out why, you haven’t studied your anatomy.

H.F. Stickleather? Don’t even get me started...

There were also some great “Family Acts” on the list, including the fabulous Rakestraws -- Ansel, Benny, Tyre and Wilbur – who competed sporadically in NASCAR competition in 1956 and `57. If you ask me, anyone with a name like Tyre Rakestraw should be awarded at least one NASCAR career win, for creativity alone.

I found Emerson Newton-John, rumored to have choreographed sister Olivia’s “Let’s Get Physical” video in the 1980s before making a single Craftsman Truck Series start in 2002. I found Bobby (not the hockey player) Ore; Ted (no relation to Sylvester Stallone) Rambo and Jesse Samples, whose brother Junior’s work on the old “Hee Haw” show is the stuff of TV legend.

There were also a few drivers whose names could serve as the final exam at announcer’s school, including Robin Schildnecht and Rolf Stommelin (one start each in the 1970s), Todd Szegedy (still running modifieds in the northeast) and “The Fabulous Finn,” Reino Tulonen.

All those wonderful names harkened me back to my youth in Vermont, when my heroes jousted on the high-banked quarter mile at "The Nation's Site of Excitement," Thunder Road International Speedbowl. The regular Thursday night feature lineup included characters like Russ "The Wild Child" Ingerson, "Hot Dog Ron" Bettis, "Dynamite" Dave Dion and "The Bethlehem Bombshell," Ronnie Marvin. To a 12-year old kid in the fourth row of the Turn Four grandstands, those cats just sounded cool. And they were.

Somewhere along the way, I think we've lost some of the color in this sport. I know Roger Penske and Miller Lite would blow adjoining gaskets, but wouldn't it be neat to have Kurt "Bad Boy" Busch in the lineup next Sunday, right alongside "Golden Boy" Jeff Gordon and Denny "Hammer Time" Hamlin? It might even sell a few tickets along the way.

So feel free to long for the good old days of "The Wild Child" and Dink Widenhouse, even if it does make “Jimmie Johnson” sound a little too tame.
Posted by Dave Moody at 12:44 PM