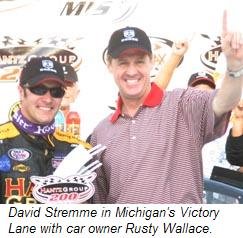 Sirius Speedway regular David Stremme dominated the ARCA RE/MAX Series “Hantz Group 200” at Michigan International Speedway Friday, lapping the entire field in the process. It marked the first time since 2002 that an ARCA race finished with just one car on the lead lap.

“I used to do that a lot,” said Stremme of lapping the field. “But as you move up, there’s more competition. The ARCA series is tough, so this is pretty cool.”

He established a new race record of 145.956 mph -- eclipsing the old mark of 142.461 mph set by Ron Barfield in 1996 – taking the lead on the opening lap in his Rusty Wallace Incorporated Dodge and relinquishing it only on a lap 42 pitstop. By the halfway mark, he was one of only two drivers on the lead lap, along with Penske Racing South developmental driver Billy Wease. He lapped Wease just seven laps later.

Blake Bjorklund finished third; the only top-five finisher without a Nextel Cup or Busch Series affiliation. Evernham Motorsports’ driver Erin Crocker finished fourth, with Brewco Motorsports’ Brad Coleman rounding out the top-five. Two cautions slowed the race for a total of 14 laps.
Posted by Dave Moody at 11:36 AM