This n' That From Here and There... 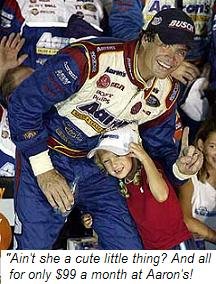 Some People Just Can't Keep A Secret: Michael Waltrip will make a major sponsorship announcement this weekend at Michigan International Speedway. Asked by Ken Schrader on this week's Inside Nextel Cup Racing why he was not announcing the deal right then and there, Waltrip said the papers had not yet been signed. Continuing to bust Mikey's chops, Schrader asked, "is there a chance they might not be signed," to which Waltrip responded simply, “Domino's Delivers."

Gee, I wonder what the announcement will be?

ISC vs Champ Car II: Writing on SPEEDTV.com, Robin Miller says Round Two of the battle between International Speedway Corporation and the Champ Car World Series will be fought today in the Arizona House Appropriations Committee. A bill was introduced recently that would prohibit motor vehicle competitions outside of closed-course facilities, if those competitions produce more than 90 decibels of noise.

Champ Car co-owner Kevin Kalkhoven, who is negotiating to hold a street race in Phoenix next season, charged ISC and NASCAR with hiring 22 lobbyists to scuttle the event. Kalkhoven said of the vote, "(it) eliminates… any racing that's not in a controlled environment. That includes motocross, autocross, karting, rallies and even the IRL. If they pull it off, they would control all racing in Arizona and there is nothing we can do about it.”

ISC and NASCAR have denied the charges, despite comments by Phoenix International Raceway President Bryan Sperber that urged lawmakers to turn thumbs-down on what he called “a rinky dink, Mickey Mouse project.”

The bill was set to be voted on last Thursday, but was withheld at the last minute. Depending on who you ask, it was held back either (A) to give the two sides time to reach a compromise, or (B) because backers knew they didn't have the votes to get it passed. State Senator Robert Blendu – who represents the district that includes Phoenix International Raceway -- reversed field on the proposal this week, after originally speaking out against the street race. Blendu now claims to have been misled about the economic impact of the event. Commenting on reports that race organizers will pour $300 million of their own money into downtown Phoenix, Blendu said, "As far as I'm concerned, I don't care if they want to race frogs." 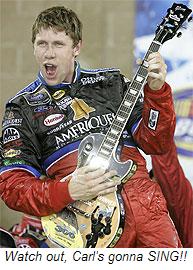 "Slowhand" Scores In Music City: Carl Edwards claimed his second Nashville Superspeedway trophy guitar Saturday night, after a dominating Busch Series win. And unlike most Nashville winners, he looked downright comfortable with it in Victory Lane. Edwards admitted to us yesterday that he does possess rudimentary guitar skills, saying, "I can play a little." Unfortunately, he said his singing voice prevents him from making a positive musical impression of any kind.

I, too, could replace Mears in the Texaco Star Car, in a scenario only slightly less likely than Wheldon jumping to NASCAR. "Dapper Dan" dropped the N-word a number of times during the offseason, in an effort to attract the attention of the Formula One paddock. When those efforts failed, he quickly signed with Ganassi to remain in Indy Cars. No one believed Wheldon had any interest in joining the stock car set then, and no one believes it now. I have also yet to find anyone in the NASCAR garage -- with the possible exception of Ganassi -- who is remotely interested in putting the defending IRL champion behind the wheel of a Nextel Cup or Busch Series machine.

Let's do the math, here. Ganassi can either keep Wheldon in the IRL -- winning races and contending for the series championship -- or shuffle him off to NASCAR-land, dropping him head-first into the Nextel Cup ranks where he will need at least two years to adapt.

It doesn't add-up to me, either. 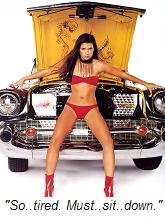 Enough Already! Could somebody please tell Danica Patrick to pipe down about the exhausting schedule in NASCAR Nextel Cup racing? Again this week -- and for the umpteenth time -- IRL's femme fatale is bemoaning the debilitating grind of big-time NASCAR racing, saying she's exhausted after THREE WHOLE WEEKS of consecutive open wheel events, and can't understand how the stock car guys possibly do it.

This just in, Danica: you don't HAVE to understand it. Be happy with your 14-race, five-and-a-half month IRL schedule, and leave the NASCAR folks alone. For a woman who proclaims to have no interest in stock cars, Ms. Patrick certanly spends a lot of time talking about them.
Posted by Dave Moody at 12:15 PM