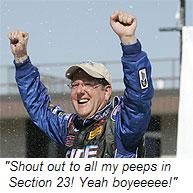 It was a good weekend for some of Sirius Speedway’s favorite on-air guests.

Benson held off the hottest driver on the NASCAR Craftsman Truck Series -- Mark Martin -- in a two-lap Dash For The Cash Saturday, after a late caution bunched the field and sent the race into overtime. Martin appeared to have the faster truck over the long haul, but in a two-lap sprint, Benson was able to leave his former Roush Racing teammate in the dust. He won by about two truck lengths at the line, sending a large number of “Johnny Benson Fan Club” members in Section 23 (his truck number) of the MIS grandstands into hysterics.

Benson, a native of nearby Grand Rapids, Michigan, called the race, "awesome. I finally got this stupid win! I'm speechless.”

J.B. becomes just the 17th driver to win in each of NASCAR's top three series, with 19 Busch Series wins, and one each in Cup and Trucks. He had finished second four times in Craftsman Truck action, the most recent coming last June in Texas.

It wasn’t all wine and roses for Johnny last week, though. He brought out the red flag Wednesday night in an ASA Late Model event at the Berlin Raceway in Marne, Michigan – a track he co-owns and promotes – slamming into a tire barrier and flipping over. You can check out a video of the crash here.