He was a major star in Trans-Am racing in the 1970s for Jack Roush, but Willy T. Ribbs is little more than a footnote in NASCAR history.

In 1986, he made three Winston Cup Series starts, finishing 39th at Michigan, 22nd at North Wilkesboro and 29th on the road course in Riverside, California. In 2001, he ran the NASCAR Craftsman Truck Series for Bobby Hamilton Racing, qualifying for 23 of 24 races, and finishing 16th in points with a best finish of 13th at Pikes Peak. His main claim to NASCAR fame was being the third African-American driver -- behind Wendell Scott and Randy Bethea -- to compete at the top levels of the sport. Ribbs faded away after that 2001 season, and has scarcely been heard of since.

Until last week, when he launched a scathing critique of NASCAR in an article written by Jason Whitlock of Knight-Ridder newspapers. 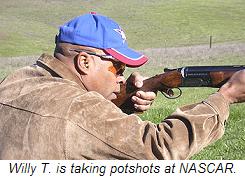 "No matter what the other racing series think of themselves, no matter how drunk they get on moonshine and delude themselves, there's nothing that equals the Indianapolis 500," said Ribbs. Asked whether he hates NASCAR, Ribbs said, "I feel the same way about them that they do about me. I raced when everybody knew that was the junior league. Mario Andretti went down south and just embarrassed those guys. And then A.J. went down there and showed `em."

Over the course of their two days together, Whitlock says he never heard Ribbs refer to NASCAR by name. Writes Whitlock, "though he talked about America's most popular racing series constantly, Ribbs referred to NASCAR as `al-Qaida' or `Neckcar' or `The WWE,'" while lauding Indianapolis as the pinnacle of American motorsport.

Ribbs' love for the "Greatest Spectacle in Racing" is curious, since his record there is as spotty as his NASCAR resume'. Comedian Bill Cosby bankrolled a pair of Indy starts for Willy T. in 1991 and 1993, getting virtually nothing in return. He lasted five laps before suffering engine failure in 1991, and despite spending more than $10-million of Cosby's money in an effort to land a top-notch ride, a 21st place finish in 1993 was the highlight of his Brickyard career.

Gasoline Alley turned its back on Willy T. Ribbs back then, while NASCAR gave him a top-notch Craftsman Truck Series ride. And yet, Ribbs now chooses to lob hand grenades at the only major racing series that offered him a legitimate opportunity to succeed. Willy T. believes that the rumored reconciliation between Champ Car and the Indy Racing League will spell doom for NASCAR, catapulting Open Wheel Racing to the top of the American motorsports ladder once again.

That degree of dementia is troubling in a man just 50 years of age, but it's his opinion, and he's entitled to it.

Ribbs is wrong about Champ Car and the IRL causing sleepless nights for the France Family anytime soon, and he's wrong when he says NASCAR hates him as much as he hates them. Willy T. Ribbs is absolutely not hated by the NASCAR community. In fact, he is barely even remembered. And that's what bothers him most of all.

You can read the complete Jason Whitlock article here.
Posted by Dave Moody at 7:26 AM