Grubb: "I Didn't Know What Was Going On." 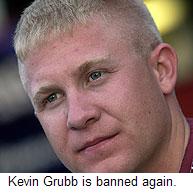 NASCAR announced Tuesday that Busch Series driver Kevin Grubb has been suspended indefinitely, after failing to comply with the sanctioning body’s substance abuse policy. This is Grubb’s second indefinite suspension related to banned substances; his first coming in March of 2004, after a positive drug test. He was reinstated on June 7th of this year, and has participated in five Busch Series events. His reinstatement required Grubb to comply with the stipulations of NASCAR’s substance abuse policy, which include periodic testing. NASCAR says he was suspended for refusing to submit to those required tests.

Grubb crashed on the second lap of Friday's race at Richmond, and when NASCAR officials approached him afterward, Hunter said, “he refused twice to submit to a test. Part of his reinstatement was that he would agree to testing, and our medical liaisons explained the consequences to him several times. He did not give any reason.”

Hunter said the test was random, and that NASCAR was not accusing Grubb of being under the influence of any illegal substance.

Grubb, meanwhile, said he was “foggy” from the impact of the crash, and does not remember much of what happened at the track. He said, “I had people pulling me in 20 different directions. I ended up leaving, from what I understand.”

After being treated and released at the track’s Infield Care Center, Grubb said he woke up Sunday morning feeling "terrible," and unable to remember what day it was. He said he then went to the hospital and was diagnosed with a concussion, adding, "I'm guessing that explains me acting crazy at the track. I didn't know what was going on."

Grubb said he called NASCAR officials Monday morning when he heard of his suspension, and was told to talk to Dr. David L. Black, the physician in charge of NASCAR's substance-abuse program. Grubb said he has yet to hear from Black, despite repeated phone calls.

He insists that he did not suffer a relapse, adding, "I've been clean the whole time." He said he offered to take a drug test on Monday, once he realized that he had been suspended. “I'm ready to put the ball in action,” he said. "I'm sure we'll get something situated out of that. I worked very hard to get my life back to where it was. I don't see it being thrown away in one night."

It remains to be seen whether or not he will get that chance.
Posted by Dave Moody at 1:59 PM